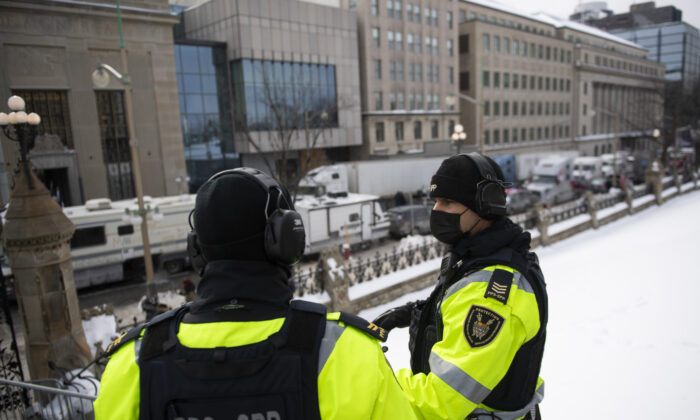 The security service in charge of protecting Canada’s Parliament did not request the Emergencies Act, its acting director told a House committee on Tuesday.

Chief Operations Officer Larry Brookson answered with a simple “No” when asked by Tory MP Brad Vis during a meeting of the Standing Committee on Procedure and House Affairs if the Parliamentary Protective Service (PPS) requested the act be invoked.

The committee is currently conducting a study on expanding the parliamentary precinct to include sections of Wellington and Sparks Streets, in view of the trucker-led Freedom Convoy protest that blocked parts of downtown Ottawa in February.

Public Safety Minister Marco Mendicino has repeatedly said the act was invoked based on the advice of law enforcement, and heads of organizations that had a security role during the Freedom Convoy protest are being asked when they testify before parliamentary committees if they did, in fact, request the act.

The government has tried to reframe Mendicino’s statements by saying he meant police requested certain tools that only the Emergencies Act could provide.

Liberal MP Greg Fergus asked Brookson if he could ask him a “more fulsome question” than the one asked by Vis.

“Would any police force ask for an act to be invoked? Or would they identify the tools that they would need for their operational challenges? And it’s up to the elected officials to find the best tool available? Which would better describe the situation?” said Fergus.

Brookson replied he could not comment on police matters because, while the PPS has the responsibility to protect the parliamentary precinct, it is not a law enforcement agency.

“Because you had answered [Vis’s] question, I just want to know, was there any more nuance to the answer of that question?” Fergus pressed.

“Well, the only extra nuance would be there was no benefit whatsoever of the invocation of the Emergencies Act for the service,” Brookson said, adding that his service did not receive any extra powers.

Liberal MP Ryan Turnbull asked Brookson if he could “speak to how frequent were the threats and security concerns shared by MPs and their staff during the occupation?”

Brookson responded that he did not have specific numbers on calls for service during that period but he was “extremely concerned.”

While the director of the PPS is required to be a member of the RCMP, he principally reports to the speakers of the House and Senate. He also reports to the RCMP commissioner on operational matters.

The organization was created in 2015 to consolidate the Senate Protective Service and the House of Commons Protective Service, in response to a breakdown in communication during the October 2014 terrorist attack by Michael Zehaf-Bibeau on Parliament Hill and at the War Memorial.