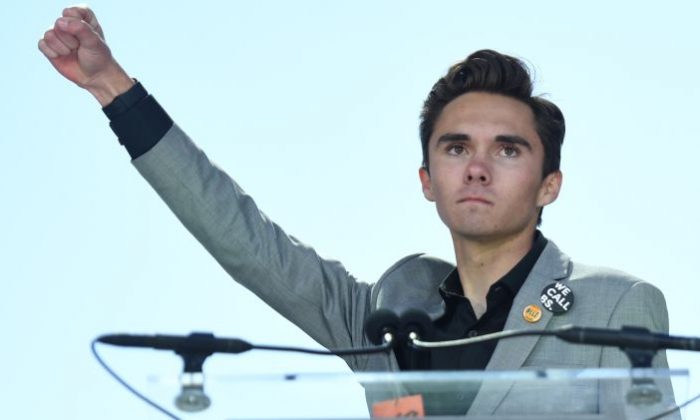 Marjory Stoneman Douglas High School student David Hogg adresses the crowd during the March For Our Lives rally against gun violence in Washington on March 24, 2018. (JIM WATSON/AFP/Getty Images)
US News

Parkland Student Slammed Over Raised-Fist Salute at End of Speech

David Hogg, the controversial Parkland High School student who has been whipping up a storm on behalf of the anti-gun lobby since the Parkland school massacre, drew more controversy Saturday after he made an odd salute at the end of his speech.

“Thank you. I love you all. God bless all of you and God bless America. We can and we will change the world,” he said in Washington before pointedly throwing his fist in the air.

Check out this little salute/gesture David Hogg does at the end of his speech. #MarchForOurLives pic.twitter.com/Tj4EgHhZV2

Some likened it to a Nazi salute, while others claimed it was communist.

Kyle Kashuv, another Parkland High student present during the shooting, but who doesn’t advocate for gun control, asked followers to caption the photo.

“First it was armbands, now it’s salutes. #MarchForOurLives seems dedicated to reviving the totalitarianism that brought so much bloodshed last century. The demonization of groups in society, calls for violence, etc This is why Americans own guns,” one person said on Twitter. “Raised fist is a Communist gesture,” one person noted.

“Not a good look. Gonna be a meme fest with this,” another added.

What a clown. Looks like a communist to me. https://t.co/bZlYWzdYJB

This dude's taste of fame is going to his head. Bigly! https://t.co/rlC8Vya1G2