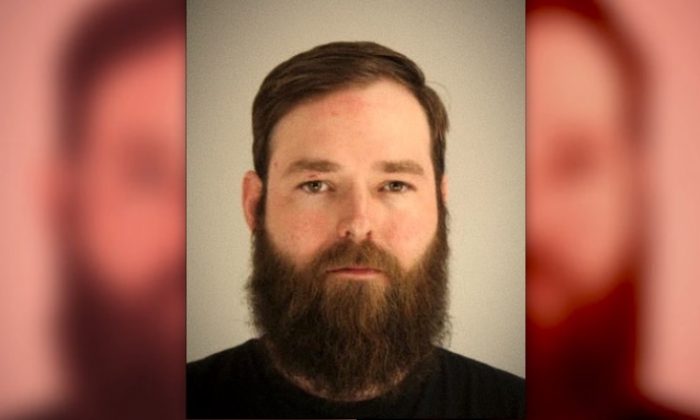 Austin Shuffield has been arrested and charged with multiple offenses following an incident caught on camera in which a woman was punched multiple times in Deep Ellum, Tx., on March 21, 2019. (Dallas County Sheriff's Department)
By Tom Ozimek

Dallas Police have arrested a man suspected of punching a woman multiple times in a Deep Ellum parking lot in a brutal assault caught on camera.

Footage of the altercation was recorded by witnesses and shows a man—who at one point pulls out a handgun—wind up and deliver five blows to a woman’s head area.

“All I could do was try and protect myself,” said victim L’Daijohnique Lee, reported WFAA.   ”He literally sat there and beat me like a man.”

The guy in the picture is Austin Shuffield, he viciously assaulted this young lady while also brandishing a gun!! #womanbeater pic.twitter.com/bbluad3KuD

According to the arrest warrant cited by WFAA, police were called at about 4:26 a.m. Wednesday to a disturbance, where they encountered a 24-year-old woman who said she had been assaulted.

Lee told WFAA she had been out in Deep Ellum with friends when she made the mistake of driving the wrong way down a street and blocking a parking lot exit.

“I knew I was on a one-way street but I was stopping literally at the corner to let my friend out,” she told the news outlet, adding that she was dropping off friends at a hostel.

The woman told the police that a man, alleged to be Shuffield, confronted her about blocking the parking lot exit, according to an arrest warrant seen by CBS DFW.

After she moved her vehicle into the lot, she said the same man approached her car and tried to get a picture of her license plate, the arrest warrant said. She told police she warned the man “to get back or else she would mace him.”

The video shows the man pull out a gun during the confrontation, though he never points it at the woman nor visibly threatens her with it.

“I got scared, I was like ‘you have a gun?’ The first thing I thought to do was call the police,” she told WFAA.

The arrest warrant states that Lee told the police that when she went to call 911, the man slapped the phone out of her hand and kicked it away from her.

The video footage then shows the woman slap the man in the face. At this point, the man can be seen in the video slugging Lee five times in the area of the head and torso.

A voice in the video can be heard saying “You’re in deep trouble, bro.”

This is Austin Shuffield of Dallas, Texas in this video brutally beating on a black women, she was trying to call the police but this THUG decides to knock the phone out of her hand and beats her… pic.twitter.com/CErTGSTqrA

“Hey chill, bro, that’s a female!” another calls out.

Lee told CBS11 over the phone Thursday night that she was heading to the hospital for treatment of what she believed could be a ruptured eardrum.

WFAA reported she had sustained minor injuries to the left side of her face. No further information was available on Lee’s condition.

Shuffield was arrested on the scene. He was booked into the Dallas County Jail and is being held on a $1,500 bond, according to NBC.

According to the arrest warrant, police found a .45 caliber Glock and knife inside Shuffield’s vehicle.

As news of the incident broke, Shuffield was swiftly fired from his job.

Braxton Martin, owner of the High and Tight Barbershop and Speakeasy where Shuffield worked as a bartender, told CBS that by Thursday afternoon, Shuffield was no longer employed there.

“From the video itself, it shows an aggravated assault to our eyes. That is something needs to be dealt with quickly and swiftly and that’s what we’re trying to do and make sure it’s handled properly,” said Martin.

“Watching that video literally makes me cry,” Lee told WFAA. “It didn’t even have to go that far, I just keep thinking why? It wasn’t that serious of a situation.”