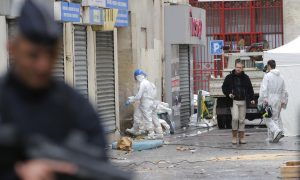 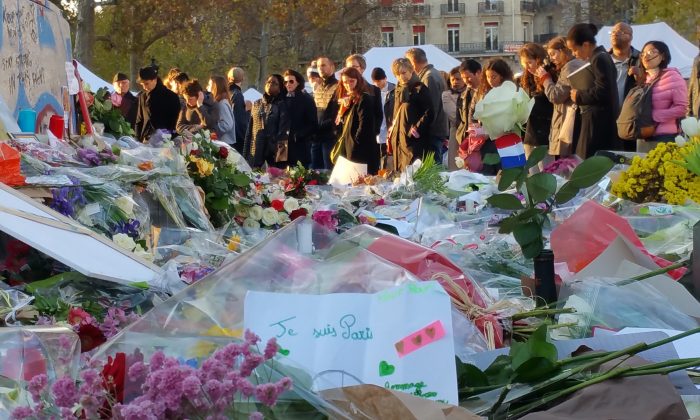 In Paris, people are encouraging each other to return to the bistros and cafes to help return life to normal
By David Vives

PARIS—The terrorists opened fire and attacked symbolic places of daily life for Parisians—bars, a stadium, a theater. As the city still grapples and regroups, a series of social campaigns has emerged in an attempt to try and heal the wounds in the capital.

The initiatives are not about forgetting the pain and sorrow of recent events. In the minds of many Parisians, it is a moral resistance: a refusal to show fear, and to live normally.

A note left in tribute at the Place de la République captures the sentiment well: “If drinking shots and going to concerts or sports matches becomes a fight, then terrorists, you can shake in your boots because we are very well trained.”

Earlier this week, a group of restaurant owners launched “Peace for Paris, Tous Au Bistro” (“Everyone at the bistro”)—a call to Parisians to meet at their local bistros to have a drink on Tuesday, Nov. 17.

The invitation, shared on Le Guide Fooding website, said the goal was “to honor, support these targeted public places in order for Paris to remain Paris.”

Leaning at the bar at the bistro Le Baromètre, customer Gildas Gentile is also thinking about how he can contribute to healing the neighborhood.

“I work with a group of 58 artists who speak out on climate change. I thought this was the most important subject of the day. Until suddenly, when I came back home at 10 p.m. on Friday evening, I found myself in front of the worst horrors,” said Gentile.

“Now I want to share moments of life, to think a little bit further. This neighborhood, we have to revive it, to give it inspiration.”

In another initiative, film director Olivier Lambert launched the hashtag #ParisDoitResterUneFête (Paris must remain a feast) on social networks, referencing Ernest Hemingway’s novel “A Moveable Feast,” about his years as an expat in Paris in the 1920s. The concept is to reclaim a party atmosphere as a way of resistance and advocacy.

The atmosphere is still heavy at the Place de la République, where the bouquets of flowers continue to pile up. At the venues where the attacks took place, life also isn’t quite normal.

Some establishments are still in shock, like the Septime, next door to La Belle Equipe where 19 people were shot dead. Manager Bertrand Grébaut said he wasn’t sure he had it in him to participate in something like Tous Au Bistro just yet.

“It is a touching initiative. We will need it in the coming weeks. … But for now, we’ve decided to lay low,” said Grébaut.

The hearts of Parisians seem divided between a need to still process what happened and the desire to return to normal life.

“There is a feeling of apprehension and fear, with a desire not to give up. But there is also a will to live, to enjoy life,” said Nicolas Raf, one of the many Parisians still coming to pay respects at the Place de la République.

“By attacking places of everyday life, the terrorists struck the lungs of France—everything that makes our country so special,” said Yves Camdeborde.

Nathalie Hanasson elaborated on those feelings: “When we talk with people, we feel they are dispirited, they share a lot of their feelings. But we can feel they want to overcome all of this, they will not let the terrorists win. Now it’s really like that, it really is ‘life goes on.'”

The memory of panicked crowds is still fresh for some restaurant owners, who had to comfort frightened customers.

Gilles Robert, manager of the Taverne Karlsbräu near the Place de la République recalled the tension of a false alarm two days after the attacks:

“On Sunday, we were told that we should not gather together. Finally the place was full. Then at around 7 p.m. there was a false alarm, a stampede on the street and we had to let 30 people in; everyone moved away from the windows, the police were on the alert, it was very strange.”

Now the fear has turned to the potential impact on business. According to the Paris Tourism Office, after the attacks at Charlie Hebdo in January, hotels saw a drop in business of 7 to 8 percent immediately, and up to 25 percent in the two weeks that followed. Then, everything returned to normal.

But this time, with the enhanced alert and having been targeted by terrorists, professionals in the industry expect the worst. “Clearly, in the evening, there are fewer people. But for now, it is still fresh,” said Robert.

“Eighty percent of our clients are from abroad,” said Idrissa Diarro, manager at the Brasserie restaurant in the Eiffel Tower.

“Those who are here are afraid, and those who are abroad are apprehensive to come,” he said. On the night of the attacks, there was also a stampede of panic in his bar.

But the manager wants to remain optimistic:

“We see that everybody is more united, everyone is more considerate, and many people are encouraging us. We will not close the shops or stay home, we will not stop living because of those people.”