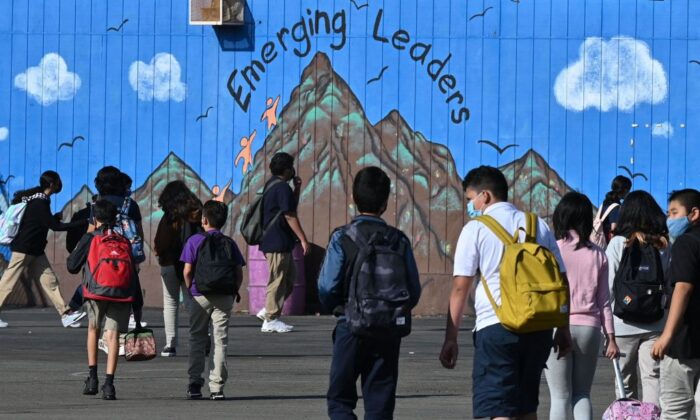 Students walk to their classrooms at a public middle school in Los Angeles, Calif., on Sept. 10, 2021. (Robyn Beck/AFP via Getty Images)
Southern California

Parents Call for Schools to Remain Open Amid Omicron Surge

After a wave of school closures due to COVID-19, parent advocate groups across the U.S. request schools to remain open.

“Despite an uptick in Covid-19 cases and the surge of the Omicron variant, schools are safe, essential and must remain open for in-person learning,” a parent groups’ open letter read.

The open letter argued that throughout the pandemic, children, “despite being the lowest-risk demographic,” have been “subjected to the harshest restrictions” and “forced to pay the greatest price, while adults have largely gone on with their lives and recreational activities.”

Last Thursday, almost 3,800 public schools in the U.S. were still not offering in-person instruction due to the pandemic, according to Burbio, a digital platform that tracks public K­–12 school calendars from across the nation.

The tracker also shows that over 5,400 schools did not return to campus for one or more days during the week of Jan. 2 for pandemic-related reasons.

Margaret Orenstein of California Students United told The Epoch Times that keeping schools closed for so long may also exacerbate inequality in urban areas where students were already underperforming.

“Elite private schools were open … earlier than these urban school districts, where kids who are extremely vulnerable and where [education] is a steppingstone out of poverty—and we’ve taken that away,” Orenstein said. “There really is no catching these students up.”

Founder of Reopen California Schools, Jonathan Zachreson—who is also running for State Assembly District 5—told the Epoch Times that he founded the group because it was “clear early on to parents that were paying attention how damaging online learning was.”

“There was not much learning happening,” Zachreson said. “And if we go to distance learning at any point in time … we’re just getting further and further behind.”

Zachreson called on state and local leadership to put an end to the restrictions for children.

“We need state leadership and local leadership to stand up to this and say, ‘This is nonsense. We are going to put kids first and do what’s right for them,’” Zachreson said.

Dr. Robert Gilchick of the Los Angeles County Health Department told The Epoch Times in a previous interview that as of Jan. 3, the department had “no intention of recommending a delay in return to campus.”

Gilchick acknowledged the difficulties and learning losses many students faced during remote learning and said the safety precautions are designed to keep students as safe as possible while on campus.

“We know how much detriment there was during the long period when [students] were doing a distance learning only,” Gilchick said. “It affected mental health, it affected physical health, it affected social development. So the state and the county are very committed to doing whatever we can to keep schools as safe as possible so kids can stay in the classroom.”

A spokesperson for LAUSD did not respond to a request for comment.

Correction: A previous version of this article misstated a signatory of the open letter. UTLA Uncensored signed the letter. The Epoch Times regrets the error.