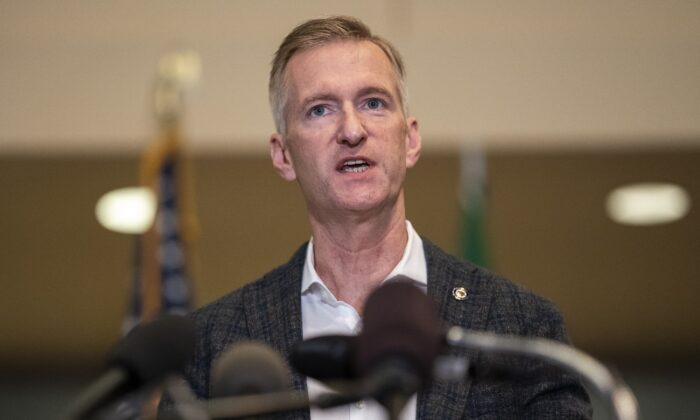 The mayor of Portland, Oregon wants to invest over $7 million towards public safety, including rehiring recently retired police officers, as the city deals with a spike in shootings and murders.

Portland Mayor Ted Wheeler laid out his proposal in a press conference this week.

Wheeler, a Democrat who also serves as police commissioner, voted with other Portland City Council members last year to cut funding to the Portland Police Bureau (PPB) and dismantle the bureau’s team that focused on stopping and responding to shootings.

But he now says shootings have gotten so bad—recently topping 1,000, including 70 murders—that additional money should be allocated for the PPB.

“Many Portlanders no longer feel safe in their city. Business owners have closed-up shop for fear of doing business in high-risk areas. Commuters fear for their safety whether taking public transit or by foot. Parents are scared to let their children play outside. People are leaving for work, going to the supermarket, or grabbing drinks with friends—and not returning home,” Wheeler said.

“I hear your fear and frustration. The tremendous loss our city has seen is not lost on me.”

The City Council recently directed $4 million to gun violence intervention groups, but none for policing. Wheeler is proposing allocating funds to add 40 unarmed law enforcement officers who can respond to what he termed “low-acuity emergency calls.” There’s also a plan to boost bureau staffing by 300 in total, including 200 armed officers, with an eye towards rehiring recently retired officers.

One recruitment method will be offering $25,000 signing bonuses, pending negotiation with the Portland Police Association, a police union.

Wheeler also wants to offer bonuses to police officers to stop them from leaving the force, use $2.6 million to equip all officers with body-worn cameras, and create a position called the dean of police education and training.

“Without these investments, the outlook for violence in our city is grim. We need comprehensive solutions,” he said.

The police union hasn’t reacted directly to the proposal, though it shared an article about two commissioners supporting allocating more money to policing.

The union called for the number of officers to increase, noting Portland’s population has grown in recent years, and proposed hiring 840 additional officers over the next five years.