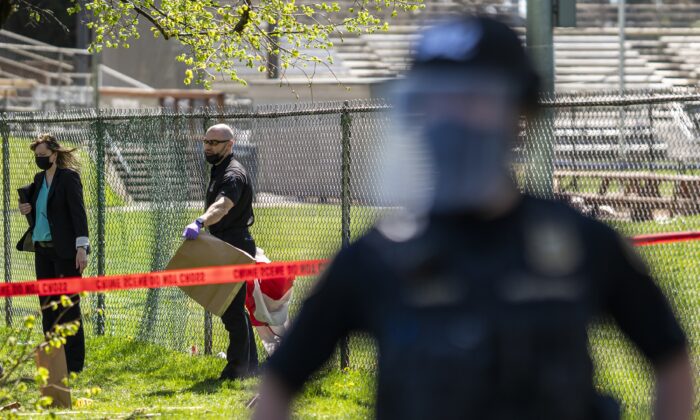 The number of murders in Portland, Oregon, has hit 70 this year and is on track to set what may be the highest total on record.

This year is on track to set a new record, with the closest year being 1987, when 66 murders were recorded, a Portland Police Bureau spokeswoman told The Epoch Times in an email.

Data for years before that are in archival form and were not immediately available.

Cities across the United States have seen a surge in killings since the start of the COVID-19 pandemic, but things have been particularly turbulent in Portland, a port city of approximately 662,000.

Rioting, primarily by far-left activists, has consumed dwindling police resources, sometimes preventing officers from answering every 911 call when it comes in.

Criminals have grown more emboldened with fewer officers on patrol, and crime has increased alongside shootings and murders.

Arson, larceny, motor vehicle thefts, and robberies are up through September when compared to the first nine months of 2020, as are assaults, human trafficking offenses, sex offenses, and kidnapping, according to bureau data. Many crimes, including murders, had already risen in 2020 compared to the previous year.

Murders rise in a city due to a number of factors, Maria Haberfeld, a professor of police science at John Jay College of Criminal Justice, told The Epoch Times in an email.

They can include an increase in youth joining gangs and engaging in violence; an economic downturn that leads to more unemployed people, some of whom start using drugs and become violent; an introduction of a new drug or drugs on the streets; social unrest; restrictions on police agencies; and a softening on crime by prosecutors.

Measures imposed during the COVID-19 pandemic led to a sharp rise in unemployment and Oregon and Portland officials have restricted police officers in Portland while cutting staff numbers and redirecting funds to community groups.

Multnomah County District Attorney Michael Schmidt last year upon taking office implemented new policies, including not charging everybody who was arrested during protests or riots.

“The situation in Portland shows the disastrous impact of the ongoing effort to not only ‘defund’ but ultimately ‘abolish’ police. Thanks to radical city policies, law enforcement has been totally hamstrung from dealing either with the city’s criminal element or with the growing political violence from Antifa and similar groups,” Kyle Shideler, director and senior analyst for homeland security and counterterrorism at the Center for Security Policy, told The Epoch Times via email.

Antifa, a far-left, anarcho-communist network, has been behind a significant portion of the rioting in Portland since the death of George Floyd in Minneapolis on Memorial Day in 2020.

“Police are denied access to non-lethal munitions to prevent violence. The city’s rapid response unit has resigned en masse. Law enforcement officers know that responding to violent criminals may result in an incident which sparks new riots and protests, and that if it does the city will abandon them. Meanwhile, the major discussion in Portland is not whether to support police but whether to further defund police in favor of its non-police ‘street response’ unit,” Shideler added.

Some 167 members have retired or resigned since July 2020.

The Portland Police Association, the police union for city officers, called earlier this month for increasing the number of officers, noting that Portland has grown in population in recent years. The union wants 840 more officers hired over the next five years.

That would help address the surge in shootings and other public safety priorities, Daryl Turner, the union’s executive director, said in a statement.

The City Council last year slashed $18 million from the bureau’s budget and Wheeler eliminated a team focused on reducing the number of shootings.

They have worked in recent months to give money to community groups that work on intervention and other efforts, arguing the approach to combating shootings should be multifaceted.

“We agree that the immediate spike in gun violence is a public health threat that requires a public health response that invests in community-based organizations working to change the conditions and environments that foster violence,” the members said in a joint statement.

Commissioner Jo Ann Hardesty floated last month several other ideas, including implementing a regular gun buyback program, a new tip hotline, and a community mediation program. She also said she doesn’t think the bureau has a staffing crisis. She described it as a recruitment crisis since it has over 100 vacancies.

“What would adding millions of dollars to PPB to create more empty positions they haven’t proven they can fill do to promote public safety?” she said. While police officers play a role in public safety, “Clearance rates don’t go up by adding police, they go up when community members respect and trust the police,” she added.