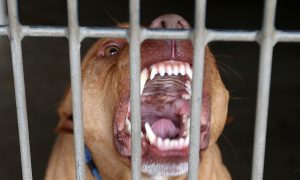 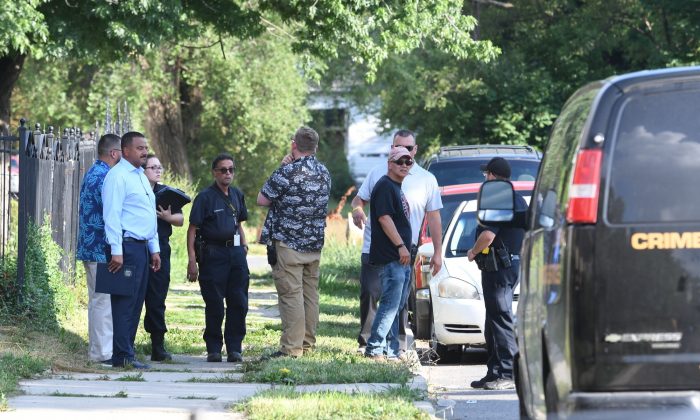 Detroit police respond to the scene where three dogs attacked a young girl who later died of her injuries in Detroit on, Aug. 19, 2019. (Max Ortiz/Detroit News via AP)
Crime and Incidents

Owner of Dogs That Killed 9-Year-Old Charged With Murder

The owner of three dogs who mauled a 9-year-old to death has been arrested and charged with murder.

On Aug. 22, Wayne County Prosecutor Kym Worthy said the Detroit man, 33-year-old Pierre Cleveland, was charged with second-degree murder, having a dangerous animal causing death, and involuntary manslaughter after his dogs killed Emma Hernandez, 9, in an alley on Monday.

“It is horrible to imagine what Emma went through as she was being mauled to death by vicious dogs allegedly owned by the defendant. It is high time that the City of Detroit shines a light on the owners of these dangerous animals that sometimes roam and wreak serious havoc—none worse than what happened here,” Worthy said in a statement.

Neighbors ran over to try to get the dogs away from the girl but weren’t able to before it was too late. She was rushed to a hospital but soon pronounced dead.

Armando Hernandez, Emma’s father, said he rushed over and tried to perform CPR. “She was gone when I reached her,” he said. “I’m really heartbroken right now. I can’t explain it.”

He told WWJ that he’d warned Cleveland about containing the dogs in the past. The animals were described as pit bulls or pit-bull mixes.

Worthy said that Cleveland left his dogs in his backyard behind a damaged fence.

“A male neighbor threw bricks at the dogs in an attempt to stop them from attacking the child. The child was observed with multiple bite wounds on her body. Medics were called to the scene, rendered medical assistance, and transported the victim to a local hospital where she was pronounced deceased. Defendant Cleveland was the next-door neighbor and owner of the three pit bulls that attacked the victim. On Aug. 19, 2019, before the fatal attack, it is alleged that the defendant left the dogs that he knew were dangerous, loose and unsecured in the backyard of his home while he went to a nearby store,” the office said in a statement.

“Investigation of the location revealed that the fence that lined the yard was damaged and not secure. There was also a garage side door that was open and led to the alley where the victim was attacked. Further facts and evidence in the case will be presented in court at the preliminary examination,” the office added.

The three dogs were seized by the Detroit Animal Care and Control. The dogs have been slated to be put down.

“The entire team at Detroit Animal Care and Control is devastated by this tragedy and our hearts and prayers go out to the family of this child,” Detroit Animal Care and Control said in a statement obtained by the Detroit Free Press. “All three dogs are in our possession and will be evaluated; our first priority is to ensure the health and safety of Detroit residents. Due to the severity of this case, it is very likely that the dogs will be euthanized.”

Mayor Mike Duggan said in a statement on Wednesday that he welcomed action against the dogs’ owner.

“The death of Emma Hernandez is a tragedy that is being felt deeply by everyone in our community. All Detroiters have Emma’s family in our hearts and in our prayers. Chief Craig has been in continual contact with me on the developments in the investigation. The prompt arrest and warrant request by the Detroit Police Department are an important reminder that dog owners will be held accountable for failure to secure dangerous animals,” he said.

“It is not acceptable to have dangerous animals loose on the streets of Detroit. DPD and Animal Control are reviewing the entire issue to make certain the city will do everything possible to prevent this type of tragedy from ever occurring again.”