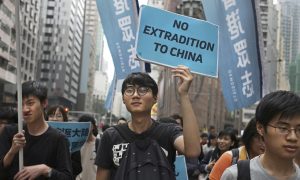 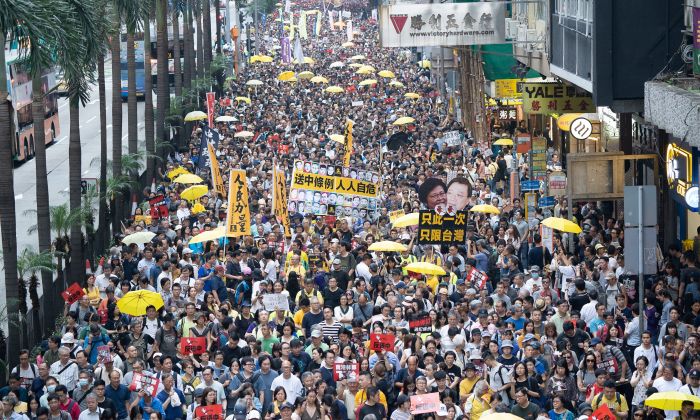 More than 130,000 people flooded the streets of Hong Kong on April 28 to oppose proposed amendments to the city’s extradition laws that would allow criminal suspects to be sent to mainland China—far greater than the expected turnout of 12,000.

Police gave a much more conservative estimate, saying that at the parade’s peak, 22,800 people attended. But The Epoch Times’ Hong Kong reporters saw the crowd continually growing as the parade made its way through the city.

The newly proposed extradition laws, first announced in February, would allow criminal suspects from any region—including mainland China—to be extradited without Hong Kong’s unicameral legislature, the Legislative Council, signing off on the requests. The city’s head of government, the chief executive, would be able to approve the extradition requests directly.

Hong Kong residents, business groups, and international rights groups have expressed concern that, given the Chinese regime’s disregard for rule of law, the changes could allow Beijing to charge and extradite its critics with impunity.

The U.S. administration also expressed concerns about the extradition proposals, with the Department of State noting in an April 25 statement that China is rife with “human rights violations and abuses carried out by China’s legal system, as well as general deterioration of respect for the rule of law.”

The statement continued by saying the administration would closely monitor the situation in Hong Kong. “Societies are best served when diverse political views are respected and can be freely expressed. Continued erosion of the ‘One country, Two systems’ framework puts at risk Hong Kong’s long-established special status in international affairs.”

This weekend’s parade follows a March 31 protest that drew about 12,000.

The parade began in the late afternoon, snaking its way from Causeway Bay to the Central Government Complex, the headquarters of the Hong Kong government at Admiralty.

At the front of the parade was a large square banner that read, “Oppose the extradition of suspects to mainland China, oppose the evil law, reverse the amendments on Fugitive Offenders Ordinance.”

Joseph Cheng Yu-shek, a Hong Kong political scientist and former professor at the City University of Hong Kong, told the Chinese-language Epoch Times that he’s concerned the amendments would erode the legal process in Hong Kong, a city that has enjoyed relative autonomy as a former British colony.

“Once the Fugitive Offenders Ordinance is passed, each of us may be extradited to mainland China for trial. … We won’t have the basic right to a fair trial at that time,” he said.

Many held signs that called for the resignation of the current chief executive, Carrie Lam Cheng Yuet-ngor.

People also held yellow umbrellas, a symbol that came to represent the Umbrella Movement of 2014, when scores of Hongkongers occupied the streets of the city’s main financial district to call for universal suffrage in how the city votes for the chief executive. The protest lasted 79 days.

This past week, a Hong Kong court jailed four leaders of the Umbrella Movement—concluding a month-long trial that sentenced a total of nine activists who were involved in the 2014 protests.

Parade attendees carried the umbrellas to express solidarity with the activists.

Ching Cheong, a senior Hong Kong journalist, told the Chinese-language Epoch Times he’s concerned about the implications for media critical of the Chinese regime, as well as the entire city’s populace. “I want to emphasize that this law is not only targeted at the news industry, but everybody in Hong Kong,” he said.

Cheong noted that with the Chinese regime’s influence already threatening freedom of speech in Hong Kong, he worries that the extradition law will have an even more chilling effect on media in Hong Kong.

Singer Anthony Wong Yiu Ming said, “Many innocent people will be given a guilty sentence.” He is worried that “Hong Kong will have many political prisoners” if the extradition amendments allow the Chinese regime to ensnare its critics.

Denise Ho Wan-see, also a singer and outspoken supporter of Hong Kong’s pro-democracy efforts, urged Hongkongers to use their “freedoms to fight for our fundamental wish [autonomy].”

This article has been updated to include a statement from the U.S. Department of State.