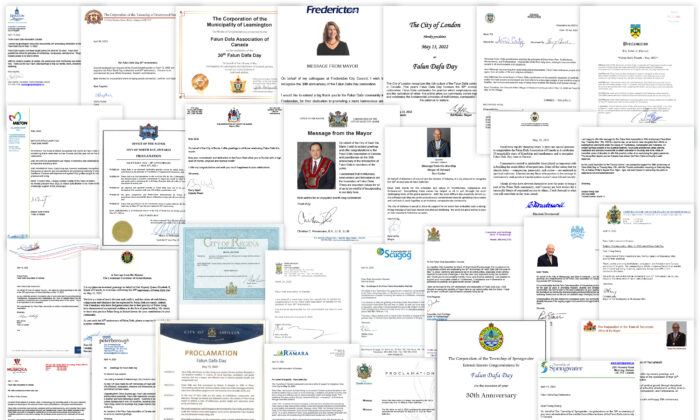 Some of the greeting letters and proclamations from over 100 officials sent in celebration of the 30th anniversary of Falun Dafa. (The Epoch Times)
Canada

Over 100 Canadian officials, including federal and provincial parliamentarians as well as mayors and councillors, sent greetings or issued proclamations in celebration of the 30th anniversary of Falun Dafa this week.

A total of 36 MPs from the Liberal, Conservative, and Green parties sent well-wishes to adherents of Falun Dafa via the Falun Dafa Association of Canada, either by video or in writing. The practice, also called Falun Gong, is a traditional cultivation discipline that involves meditative exercises and moral teachings based on the tenets of truthfulness, compassion, and tolerance. It was first introduced publicly in China on May 13, 1992, and has since spread around the world.

In his greeting letter, Liberal MP Kevin Lamoureux said Falun Dafa’s values of truthfulness, compassion, and tolerance have “so much meaning” in modern times. He called for the upholding of basic human rights, as adherents in China have been subjected to large-scale oppression by the ruling communist regime since July 1999.

That was when then-Chinese Communist Party (CCP) leader Jiang Zemin, fearing Falun Dafa’s immense popularity, launched a violent campaign of persecution that has involved systematic and widespread arrest and imprisonment, torture, and even forced harvesting of adherents’ organs.

“Together we must ensure that the basic human rights of Falun Dafa practitioners are being upheld. Falun Dafa’s promotion of truthfulness, compassion and forbearance bring immense value to our communities here in Canada,” Lamoureux said.

Conservative MP and leadership candidate Pierre Poilievre said he stands in solidarity with the Falun Dafa community in their effort to fight for freedom in China, while applauding adherents for their contributions to Canadian society during the COVID-19 pandemic.

“The universal values of Truthfulness, Compassion, and Tolerance, which are at the heart of Falun Dafa, are also ideals for Canada. I appreciate your contribution to bring these values to life in Canada for a more healthy, peaceful, tolerant, and compassionate society,” Poilievre said in his greeting letter.

“In particular, I like to commend the Falun Dafa community’s efforts to help Canadians improve their health and manage their stress, during the pandemic, by holding free online meditation workshops that have been attended by thousands across the country.”

Interim Conservative leader Candice Bergen said in her letter that many Canadians have benefited from Falun Dafa’s approach to self-improvement.

“Falun Dafa traditions encourage practitioners to improve their mental and physical well-being, while being rooted in the honourable values of truthfulness, compassion and tolerance,” Bergen said.

“I would like to thank the many Falun Dafa practitioners who took these values to heart during the pandemic. I am grateful for the efforts you made within your communities to encourage and uplift your neighbours during these hard times.”

Green Party MP for Saanich-Gulf Islands Elizabeth May said she has “great respect” for the principles that guide the Falun Dafa movement.

“I stand with you not only in celebration but in solidarity as you fight to protect your right to your spiritual practice,” she said.

On May 10, as thousands of Falun Dafa adherents gathered on Parliament Hill to celebrate the anniversary, Lamoureux and three Conservative MPs—Arnold Viersen, Brad Redekopp, and Garnett Genuis—raised issues related to Falun Dafa in Parliament.

Genuis, in addition to sending video greetings to adherents, presented a petition that “highlights the horrific persecution of Falun Gong practitioners in China.”

“This has been going on for decades,” he said.

“Action is urgently required to address human rights abuses impacting all of the people living in China. Falun Gong practitioners, in particular, have been victims, in spite of the fact that their simple activity is a spiritual practice seeking to advance the principles of truthfulness, compassion and forbearance,” Genuis explained.

“Petitioners call on Parliament and on the government to work to end the targeting of Falun Gong practitioners, in particular taking measures to combat forced organ harvesting and trafficking, to publicly call for an end to persecution and to use appropriate sanction mechanisms targeting the perpetrators of this violence.”

Viersen also presented a petition on the subject of forced organ harvesting of Falun Dafa prisoners of conscience in China.

“The petitioners want to make it a criminal offence for a person to go abroad and take an organ without the consent of the person giving the organ. This particular bill has passed through the Senate unanimously three times, and the petitioners are hoping that this Parliament is the Parliament that gets this bill passed,” he said.

‘Values That We Cherish’

Dowdeswell congratulated the Falun Dafa Association of Canada, while emphasizing the importance of spirituality in keeping a society whole and harmonious.

“Communities rooted in spirituality have played an important role in building the social fabric of our province,” she wrote. “Many of the values that we cherish today—compassion, generosity, and justice—are anchored in spiritual traditions. Inherent among those who practice is the courage to continuously seek positive transformation in one’s own life and society.”

“I thank all who have devoted themselves over the years to being a part of the Falun Dafa community, and I convey my best wishes for a successful future of continued service to others.”

Mirasty praised the resilience of Falun Gong adherents who fled persecution back home in China to uphold their beliefs.

“We live in a time of much division and conflict, and the values of truthfulness, compassion and tolerance that are espoused by Falun Dafa are timely, indeed,” he wrote. “New Canadians who have fled persecution due to their practice of Falun Gong have demonstrated exceptional resilience in the face of great hardship.”

“Traditional dance and music, such as this, provide a unique opportunity for Ontarians of all backgrounds to gain more knowledge and appreciation of Chinese culture,” he said. “Ontario’s diversity is one of our greatest assets and Chinese art continues to play an important role in our pluralistic society, which has made our province one of the best to live in Canada.”

Mayors and city councillors from more than 70 municipalities and townships sent complimentary letters ahead of the Falun Dafa’s 30th anniversary, including in the cities of Toronto, Ottawa, Regina, Saskatoon, Edmonton, Calgary, Victoria, Winnipeg, and Fredericton.

As of May 14, the total number of greetings from officials nationwide in three levels of government was 120.

Falun Dafa practitioners across Canada have been celebrating the anniversary in various forms over the past few weeks, with parades and rallies in almost every province and government officials giving speeches. Events in Ottawa, Toronto, Quebec, among other cities, included adherents performing traditional dance and music, with the Tian Guo Marching Band leading the parades.

In addition, Falun Dafa flags were raised in roughly 20 cities in Alberta, British Columbia, Ontario, and Saskatchewan, while landmarks were lit up in celebration of the event.