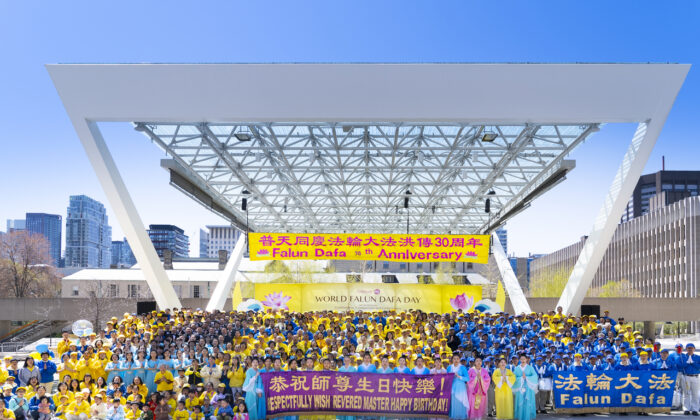 Hundreds of Falun Gong adherents commemorated the 30th anniversary of the spreading of the practice in downtown Toronto on May 7, 2022. (Evan Ning/the Epoch Times)
Canada

Hundreds of Falun Gong adherents commemorated the 30th anniversary of the spreading of the spiritual practice around the world with dance and music performances and a large parade through downtown Toronto on May 7.

Several prominent political and community leaders joined the celebration and voiced support for the practice, which includes meditative exercises and moral teachings based on truthfulness, compassion, and tolerance. As called Falun Dafa, the practice was first introduced in mainland China in 1992, where it quickly gained widespread popularity due to its health benefits. By 1999, the practice has attracted 70 million to 100 million adherents in China, according to government estimates.

However, then-Chinese Communist Party (CCP) leader Jiang Zemin deemed the large number of adherents a potential threat to its totalitarian rule, and in July 1999, launched a brutal oppression campaign to eradicate Falun Gong. The persecution is ongoing and has been criticized by democracies around the world.

During the rally on May 7, Joel Etienne, a human rights lawyer, said he has a hopeful vision of Falun Gong being allowed to spread openly and freely in China again, adding that he has seen the great strength and resilience of its adherents in their fight against tyranny.

“I dream of a day when mainland China, across the country and across the cities and across the land, Falun Dafa celebration day will be celebrated in peace and harmony and openness; where Falun Gong practitioners will have the ability to be who they are with no difficulty, with no concern, and peace of mind. I have this dream that this will happen very very soon, and we should all believe in that,” Etienne said.

He also noted that Chinese Canadians who believe in democracy and human rights suffer greatly even when they are in Canada, as the CCP’s long arm continues to target Falun Gong adherents living overseas and harass their families back in China.

“As a human rights lawyer, I can bear witness to the plights, the suffering, and the struggle of the Falun Dafa community over these many decades,” Etienne said. “And I say that Falun Dafa practitioners and Chinese Canadians who believe in human rights and who believe in democracy, pay a much heavier price than any other Canadians. Why? Because, day-in-day-out, they have to worry about interference on Canadian soil, they have to worry about how their family members are affected and are prosecuted back home.”

“I feel the pain, I feel the sorrow. When I get the phone call at 2 o’clock in the morning to tell me that a brother, a sister, a cousin, a best friend, has been arrested in China and has been made to disappear because of their beliefs, because of their truth clarification,” he continued.

Former Tory MP Wladyslaw Lizon, a Polish Canadian and longtime friend of Falun Gong adherents, called on the Canadian government and other democracies around the world to stand up to the oppression of tyrannical regimes.

Former senator Consiglio Di Nino said he felt like he was sitting on an “emotional roller coaster” thinking about the many Falun Gong adherents in China who are still subjected to inhumane treatment, including torture, sexual abuse, and live organ harvesting.

“It’s truly unbelievable that after [23 years], the world is still allowing this to happen, and indeed is not standing up as strongly as they should be to say to China: stop this nonsense, stop being a subhuman group of people, embrace an organization that preaches the values, the fundamental values that we need most in the world,” Di Nino.

Gloria Fung, democracy activist and president of Canada-Hong Kong Link, said Falun Gong adherents have defended the freedom of belief, which is the “cornerstone” of all freedoms that “made all of us fully human.”

“But now, these commonly cherished values in Canada are also under attack from the Chinese Communist Party. Over the past decade, we have witnessed the Chinese Communist Party’s increased intimidation of Canadian activists on Canadian soil, and also … cyber attacks and disinformation campaign to enhance the social polarization as well as to corrode our democracy here,” Fung said.

Lieutenant Governor of Ontario Elizabeth Dowdeswell and Mayor of Toronto John Tory both sent congratulatory letters, which were read at the rally.

Jordan Schmidt, a German researcher who watched the performances, said he has been to China and the universal values of Falun Gong are “very important” for the people in China today.

Schmidt’s friend, who only wanted to be identified as Jason, said he saw many news reports of the communist regime’s human rights violations, including the imprisonment of the Uyghur Muslims in northwest China.

“They have camps where people are being locked up in prison because they have different beliefs and they are not conformed with the main Party and the main government. Taking this into consideration as well, I do believe that also other ethnicities, also other religious formations are being discriminated and put away in jail. And this is of course a very bad thing,” Jason said.

“The Chinese government is not very cooperative and they like to keep secrets to themselves. And also the press is not free in China. That’s obvious. That’s not good for the people living there and also not for the rest of the world.”

Following the rally, Falun Gong adherents paraded through downtown Toronto, starting from the Nathan Phillips Square and down Queen St. West, turning on Spadina Ave., then to Dundas St. W, and back to Toronto City Hall.

Falun Gong adherents commemorate the 30th anniversary of the practice’s introduction with a parade at Toronto City Hall https://t.co/EQbnDgaTcB

Falun Gong adherents commemorate the 30th anniversary of the practice’s introduction with a parade through downtown Toronto on May 7, 2022. https://t.co/LHIDm5Gtyd

A Torontonian, identified only as John, said he has seen the Falun Dafa parade many times in the city, and this time he followed the parade all the way to where it ended.