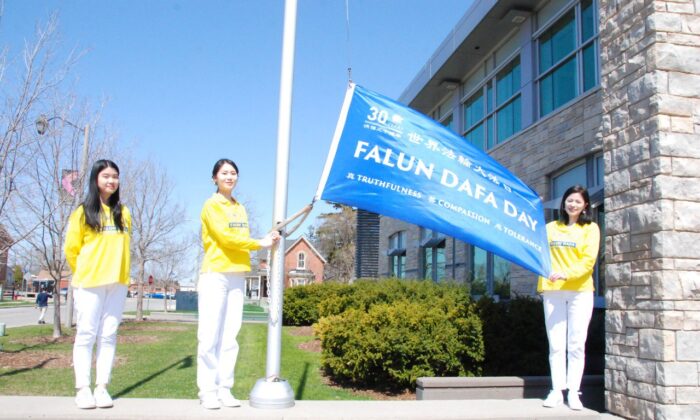 Falun Dafa adherents raise a flag in celebration of the 30th anniversary of the spread of the spiritual practice, in the City of Milton, Ont. on April 29, 2022. (Arek Rusek/The Epoch Times)
Canada

Falun Dafa flags have been raised in close to 20 Canadian cities in celebration of the 30th anniversary of the spread of the spiritual practice on May 13.

A series of flag-raising ceremonies kicked off on April 29 in southern Ontario’s Town of Milton, where Mayor Gordon Krantz pronounced May as Falun Dafa Month.

“Falun Dafa has received worldwide recognition, including thousands of awards and proclamations, for promoting harmony in society through its traditional Chinese self-improvement system that guides people to mental, moral, and physical well-being,” Krantz said.

Also called Falun Gong, the spiritual practice was first introduced in China on May 13, 1992. The practice involves meditative exercises and moral teachings based on the tenets of truthfulness, compassion, and tolerance. By 1999, the practice had between 70 million to 100 million adherents in China alone, according to official estimates.

On May 4, City of North Bay Mayor Al McDonald participated in a flag-raising ceremony, where he praised adherents of Falun Gong for their resilience in the face of over 20 years of brutal persecution and the oppression campaign launched by former Chinese Communist Party (CCP) leader Jiang Zemin, who perceived the popularity of the spiritual practice in China as a threat to the regime’s totalitarian rule.

“Raising this flag in commemoration of the 30th anniversary of the spread of Falun Dafa is very important for all of us, because it is a symbol of compassion and tolerance. This is our value that is welcomed by this city and everyone here.”

“‘Truthfulness, compassion, tolerance.’ These three words the world today needs, particularly in this time when the society is facing many challenges.”

On May 5, Mayor Marianne Meed Ward of Burlington, Ontario, raised a Falun Dafa flag while announcing May 13 as the city’s Falun Dafa Day.

“We certainly appreciate the values that Falun Dafa has of truth and tolerance and compassion. Those are values here in the City of Burlington,” Ward said.

The Township of Brock, Ontario, raised a Falun Dafa flag on May 5. Mayor John Grant, who joined the ceremony, said it was an “important anniversary.”

Belleville Mayor Mitch Panchik said Falun Gong adherents’ efforts in raising global awareness of the CCP’s human rights violations are also a reminder of similar injustices around the world, while at the same time, reflect the freedoms that Canadians enjoy.

“For the last 30 years, the Falun Dafa movement has brought attention to oppression and a lack of freedom around the world. And unfortunately, today we see this so often in different places—we see it, of course, in China, … we’re seeing it now in Ukraine, and we have much to learn,” he said.

“But we also have much to appreciate in our country, where we have conditions that allow for the peaceful exchange of ideas and for people to practice, and where a mayor of a city like Belleville can declare Falun Dafa Day, which is a wonderful, wonderful thing.”

Other municipals in Ontario, including the City of St. Catharines, City of Cornwall, and Town of Greater Napanee have also joined in the flag-raising celebration commemorating Falun Gong’s 30th anniversary.

Cornwall Mayor Glen Grant declared May 2022 as Falun Dafa Month in respect of the values of truthfulness, compassion, and tolerance.

Falun Dafa flags were also raised in cities on the West Coast and the Prairies.

In Toronto, Canada’s largest city by population, the Toronto sign on Nathan Phillips Square outside city hall was lit up on May 7, after hundreds of Falun Gong adherents celebrated the anniversary with a massive rally and parade through the downtown core.

More cities and townships in Ontario have or are scheduled to join the flag-raising commemoration ahead of May 13, including Amherstburg, Brighton, Orangeville, Orillia, Port Perry, and Quinte West, with some celebrating by lighting local landmarks. The City of Regina, Saskatchewan, and City of Edmonton, Alberta, will also raise flags.

Michelle Hu and Xinxin Teng contributed to this report.