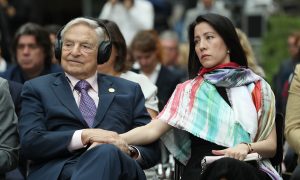 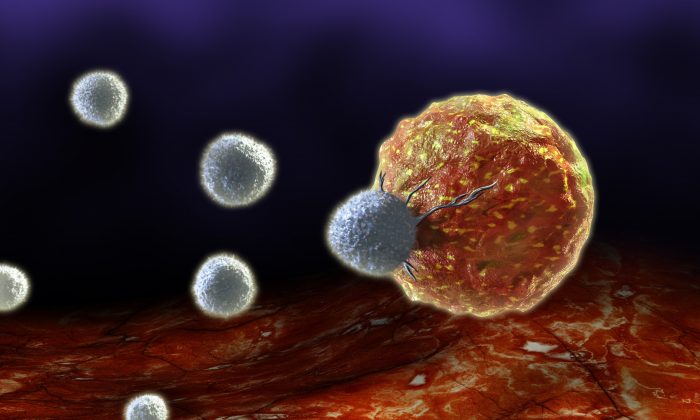 A digital illustration of T-cells attacking a cancer cell. (Andrea Danti/Shutterstock)
US News

A 2-year-old girl was diagnosed with ovarian cancer in a rare case, according to reports.

“We are so excited for this news! Kenni is a for real warrior princess if you ask me! Also, the labs from this week seemed to show that her levels are better, and the platelet and blood transfusions worked (that’s if Michael and I are reading the report appropriately we haven’t gotten a call to go back to the hospital so that’s a good sign ),” they said via GoFundMe.

McKenna “Kenni” Shea Xydias was diagnosed with an ovarian yolk sac tumor on Feb. 15 after she had a 103 degree Fahrenheit fever and a bloated stomach, according to ABC.

Mike and Meagan Xydias, her parents, said the news came as a blow to them and they are working to get her treated as soon as possible.

Every day brings something new. Kenni had a wonderful day today, full of smiles, laughter, independent walking, and she…

“The immediate reaction was, ‘How could this happen?'” Mike Xydias, who is a father of two other children, told ABC’s “Good Morning America.”

“I knew of this being [more common] in women. I didn’t realize that it could happen to such a young kid,” the Georgia man said.

The cause of yolk sac tumors is unknown, according to the Cincinnati Children’s Hospital Medical Center, which said they’re quite rare. It’s most likely found in children under the age of 2.

“A yolk sac tumor is a rare, malignant tumor of cells that line the yolk sac of the embryo,” according to the medical center’s website. “These cells normally become ovaries or testes; however, the tumor can also occur in areas such as the brain or chest.”

“She is full of spunk and sass, she’s sweet and she’s funny." Please join us in sending sweet Kenni our love ❤️, prayers and very best wishes as she continues her journey to OVARCOME! 💙 #OvarcomeTogether

On its website, the U.S. Department of Health and Human Services highlighted how rare the case is, saying it accounts for less than 5 percent of all ovarian cancer cases.

When her parents took her to the doctor’s office, she had a bloated belly, and her parents thought it was a growth spurt or something routine. The doctor told them that it was gas.

“We sent her back to school and the day care called me and said, ‘Her fever’s at 103 and we’re really concerned about her belly. It seems even bigger,’ ” Meagan Xydias added to People magazine.

They went back to the pediatrician and were given assurances she would be fine.

She was diagnosed with a condition that accounts for just 5% of all ovarian cancers.

The mother added, “They said it was gas but I kept saying, ‘Something’s wrong. It’s not gas. Something’s not right.’”

An MRI revealed several tumors in her abdomen.

Last month, Kenni underwent surgery, and doctors were able to remove 90 percent of the tumors in her abdomen. They also removed an ovary and 5 inches of her intestine, according to a GoFundMe page.

“That being said, Kenni starts chemo tomorrow!” her parents wrote in late February on Facebook. “We’ve been anxiously awaiting this next part of our journey. There are so many unknowns, all we can do is pray that everything will work out—that Kenni will not have horrible side effects, and that her cancer will be demolished during treatment.”

Her forbearance has inspired her parents.

“Kenni is our hero with how she’s dealing with this,” Mike Xydias told ABC. “She is a ball of energy and a stereotypical 2-year-old. She’s the youngest child, where she is the boss, and she’s extremely stubborn, which is a great character trait going in to fight cancer. She doesn’t let anything stop her.”

The parents said that her story should inspire parents to trust their instincts when it comes to their children’s health.

“I know it can be hard as a mom to go to your doctor and say, ‘Something is not right,’ because they know what they’re doing, but sometimes you have to trust your gut,” Meagan Xydias added to ABC. “I hope after hearing Kenni’s story people are willing to say, ‘Hey, can you do one more check?’ ”