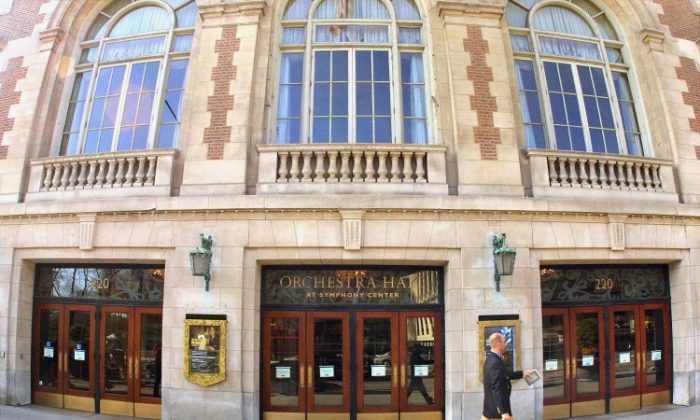 A man walks past the main entrance of Chicago's Orchestra Hall, home of the Chicago Symphony Orchestra in this file photo. Many orchestras around the country are struggling financially due to a lack of funding and ticket sales. (Tim Boyle/Getty Images)
US

The Indiana Symphony Orchestra is nearing its sixth week of canceled concerts. The Musicians’ Union (MU) made its best offer yet, but administrators are demanding more sacrifice.

Big budget shortfalls have meant hard choices for many orchestras across the country. Contracts with fewer players and pay cuts for the ones that remain finally ended the Atlanta Symphony’s bitter labor dispute.

It took a walkout at the Chicago Symphony Orchestra (CSO) for the MU there to get the deal it wanted. Resolution was swift to avoid missed performances, but the agreement came with some pain.

“These were difficult and exhausting negotiations,” said Steve Lester, chairman of the CSO Members Committee in a statement. “In order to continue to serve our audiences and to keep providing the very best in the art form of orchestral music, both sides had to compromise.”

These are tough times to be running an orchestra, and according to Michael Wilkerson, professor of arts administration at Indiana University’s School of Public and Environmental Affairs, without substantial changes there will be more pain to come.

“It’s starting with symphonies, but we’ll probably see it in opera theaters, art museums, big theater companies, and lots of other things,” Wilkerson said. “This is just the beginning of this phenomenon unfolding.”

Arts funding is not what it used to be, and things have only gotten worse since the recession. With even less money than before, there is little room to make cutbacks.

“An orchestra is an orchestra because it’s a certain size, and the music is the music—you can’t play the Beethoven piece any faster, and you can’t play it with fewer players,” said Wilkerson. “You can cut this and cut that, but you still need to put a whole orchestra up on stage in a hall with excellent acoustics. That’s just what you have to do.”

Despite challenging times, Wilkerson believes that there is hope.

He recently wrote an article promoting new ideas for arts funding, and he said that the symphonies making the headlines are based on old models that cannot keep up in the new environment.

However, there are innovative examples they can look to.

One such example can be found in Los Angeles. At a time when so many orchestras are struggling to survive, the Los Angeles Philharmonic thrives, and many credit CEO and President Deborah Borda for the philharmonic’s success. Under her command, musicians at the Phil enjoy some of the best labor contracts in the country.

According to the L.A. Times, Borda transformed the once financially distressed Phil into a successful organization with the largest annual budget of any American symphony. Borda’s choices may be unconventional, but she was able to get the community excited about the orchestra again.

Attendance is way up and so are donations.

The key, said Wilkserson, is that Americans need to realize that their city’s orchestra is vital to its identity.

“It’s very similar to sports,” he said. “Perhaps it appeals to a slightly different demographic, … [but] people look to these kinds of things more strongly in harder times.”

Wilkerson suggests looking to other countries where interest in symphonic music remains high. In South Korea for example, where the symphony enjoys great enthusiasm, practically everybody plays an instrument in school. Contrast this to American schools where attention is focused almost exclusively on math and science, and it is easy to see why orchestral interest in the states is waning.

One of Borda’s bold choices was the selection of the young, dynamic Gustavo Dudamel as the L.A. Philharmonic’s musical director. Just 26 years old when he was hired, Dudamel emerged from South America’s El Sistema movement—a program that encourages disadvantaged youths to play classical music and create orchestras.

Dudamel said that he was attracted to Borda’s drive to develop local youth orchestras in the United States.

El Sistema has influenced a renewed interest in classical music as it has spread across the Southern Hemisphere, and it all started in Venezuela.

“There’s no particular reason why that should be booming there except that it was made a national priority,” Wilkerson said, adding that the program has been found to improve school attendance, test performance, and graduation rates.

In the past, financially impoverished orchestras looked to the government for help, but federal funding for the arts in the United States has become politically unpopular. Wilkerson said that government support is now so low that many organizations no longer bother applying.

Even without allocating more money to arts funding, lawmakers can still help foster a prosperous arts culture, according to Wilkerson.

He points to an emerging sector of “low-profit” corporations that are designed to encourage more funding options. The idea is already being implemented in small ways, but Wilkerson said that legal changes at the state and federal level could make it easier for more organizations to take advantage of the concept.

“The idea is that there is too stark a distinction between for profit (investors seek a high return) and nonprofit businesses (investors not allowed, but donors are encouraged),” he said. “If a popular and meaningful vehicle were created in the middle between those two poles, there might be a solution.”

The Epoch Times publishes in 35 countries and in 19 languages.Subscribe to our e-newsletter.