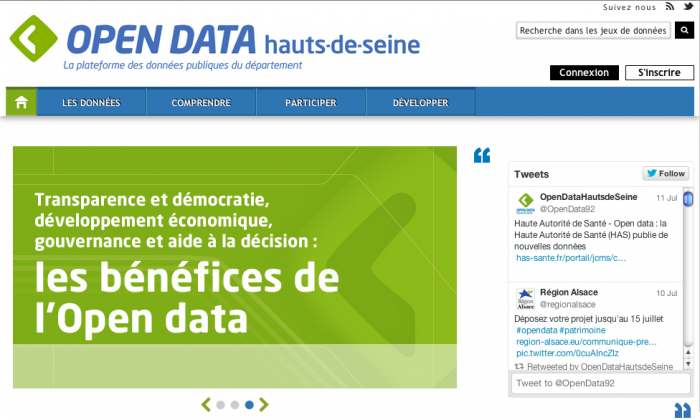 Open Data Getting its Way in Île-de-France

PARIS — For the neophytes, the term “Open Data” represents freely available computer information that is transmitted according to diverse licenses that guarantee their use by anyone. Donning a certain iconic significance, the transmission of this data is considered of public interest. To this day, it is difficult to precisely evaluate the cost-effectiveness of Open Data, but its use is widespread.

Nowadays, local authorities, companies, and public services rely more and more on Open Data in their infrastructures. The French government is also investing heavily in the “collaborative transformation of the territories” (transformation des territoires de façon collaborative) by employing easy-access data sources. Initiatives are quickly growing in nearly half of the regions of France, including Île-de-France.

The rise of “Open Data” in the French digital landscape

In 2009, when Open Data was the subject of great interest around the world via the Internet, French public authorities also got interested in it through civic campaigns such as Libertic or Open Street Map France. To this day, according to Claire Gallon, host for the organization Libertic, the exploitation of Open Data in France is progressing well: “In less than three years, there has been a sensitive evolution in the way public actors addressed the subject,” she said.

In order to guarantee the security of their use, the operation of such data must stay inside a legal frame strictly controlled by the granting of open licenses. The work on Open Data must stay open and accessible to all. The only existing restrictions to transparency concern commercial secrets, private life, and national security. But today, Open Data represents a civic and economic opportunity: according to its supporters, it will “strengthen social links and develop economic initiatives.”

Amidst the companies benefiting from Open Data, the French national railways company SNCF and the Parisian public transport company RATP appear to be the most interested. For instance, SNCF plans in the near future to give travellers estimates of the train flow in stations, and the calculation will be based on Open Data. In a similar example, the first automatic subway to go through the Grand Paris Express will be, according to its designers, “100% Open Data.”

Philippe Yvin, head of the Society of Great Paris (SGP), explained: “The Grand Paris Express will be a great digital transportation channel for the 153 towns served and the 160,000 nearby companies. … The investors know they will benefit having the most advanced and open digital infrastructure.”

Last June, the General Council of Hauts de Seine county, under the direction of Patrick Devedjian, published new information on the website Opendata.hauts-de-seine.net. This website actually hosts 48 new sets of data, from a total of 108 sets, accessible to all. The goal of the operation is to “promote a spirit of achievement while conserving the necessary flexibility to ensure a real cooperation between all the actors.” This platform is opened to all exchanges and sharing between web users.

The data is mainly directed at professionals, designers or start up mobile application developers, journalists, and researchers. One can for instance find maps of schools by sector, local flora inventories, topographic plans of parks and gardens… According to the General Council, this base could help mobile phone apps to create health trails.