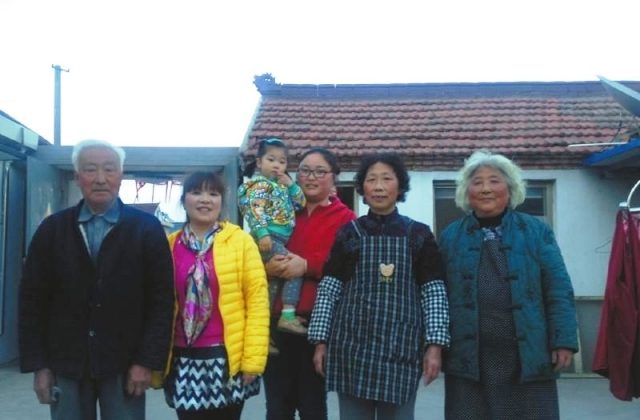 Wang Yinyin, holding her child, said, “I have a total of 8 elderly relatives on my shoulders, including the ones from my husband’s side.” (Internet)
China

Getting older in China has gotten more difficult, as the one-child policy has left far fewer young people to take care of the growing ranks of the elderly.

Rudong County in eastern China’s Jiangsu Province is ground zero for analyzing the impact of the one-child policy, as a planned reduction in population growth started there earlier than anywhere else in China.

The ways in which the one-child policy has made life more difficult harder for the growing ranks of China’s older citizens is prominent in Rudong, and also visible in a recently released report on the country’s rural elderly.

According to the county authorities, Rudong County’s population has aged 20 years ahead of the rest of China

Wang Yinyin is a 28-year-old wife and mother in Rudong. According to a report in the nationally-distributed Southern Weekly newspaper, there are 18 family members from five generations under her roof.

Among the 18, 13 of them are older than 50, and only four of them are young adults. The skewed age distribution is due to the state’s policy of only allowing a couple to have one child, a policy that has been implemented throughout China through draconian measures, including heavy fines, forced sterilizations, and forced abortions.

The 92 year-old Zhu Xuezhen is the eldest in Wang’s house. She is bedridden year round, and her two daughters, both in their 70s, take turns caring for her.

The eight members of the third generation are the family’s breadwinners. They will become the biggest burden to their offspring in a decade or two.

The fourth generation is the one born in the 1980’s. Products of the one-child policy, they are in the prime of life and are working hard. Wang Yinyin is one of them. The fifth generation is Wang’s daughter. She’s only 4.

Wang said that she is responsible for caring for eight older family members, including those from her husband’s side. For the time being, this work is shared. Belonging to a traditionally large family where more than a dozen people live and eat under one roof, the younger ones rely on the elderly to take care of each other so that the young can work and make a living.

According to the county authorities, Rudong’s population has aged 20 years ahead of the rest of China.

Negative population growth started in 1997 and has lasted for 18 years. Data show that at the end of 2013, Rudong’s registered household population was 1.04 million, a decrease of 2,200 people from the previous year. The natural population growth rate was a negative 3.62 percent.

Currently, there are 8,400 elderly in Rudong qualified for admission to a nursing home. However, the majority of the total of 4,292 nursing home beds in Rudog’s 14 townships are vacant. Most of the elderly cannot afford the cost..

While Rudong has aged more rapidly than the rest of China, the trends visible in Rudong are hardly unique.

Zhang Xiong, the dean of the humanities department at the Shanghai University of Finance and Economics, conducted a large-scale field investigation on the elderly’s living conditions in rural China in order to understand better the expanding social burden posed by the country’s senior citizens. A report on their findings was released on April 21 during a seminar at the university.

The report shows that the vast majority of China’s elderly are cared for by their children, but the incidence of the elderly staying alone without other adults has been increasing.

Nationwide, about 19.1 percent of rural households are kept by the elderly.

Many of the elderly living at home are not retiring, but rather are in charge of taking care of the grandchild for their migrant family members working elsewhere in China. Twelve percent of households are kept by a young child and an elderly relative or relatives.

Farmers Injured for Protesting Land Seizure in China (With Video)

Limited income, a need for accessible medical and nursing services, and a lack of emotional support from family members were among the most prominent problems mentioned by senior citizens in the countryside.

“The problems are quite similar regardless of province,” Lu told Shanghai Daily. “We had expected the lives of the rural elderly to be much better in big cities like Shanghai, but the results were quite the opposite. Aside from their higher pensions, rural people in some of Shanghai’s villages do not live better than those in other provinces.”

The majority of the elderly’s financial support comes from their children–68.4 percent, according to the report. The rural pension system, land income, and savings were the other three major sources of financial support.

The report mentions that while the rural pension system is faced with the challenge of sustainability, land is the rural people’s most precious asset for farmers in their old age.

Farmland in China is not owned by individuals, but by the state. Researchers recommend that the right to own land and to transfer the ownership of land to farmers should be developed. The land can then contribute to a sustainable pension for the farmers in rural areas.