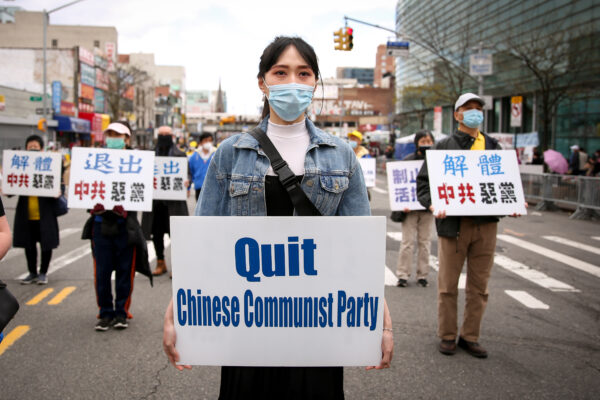 On the CCP’s Centennial, 380 Million People Have Already Quit the Party and Its Organizations

Despite the Chinese Communist Party touting itself as the savior of the people, hundreds of millions of Chinese in the country and around the world have already quit the Party and its affiliated groups, records from an overseas human rights group show.

On July 1, in a speech celebrating the CCP’s 100th birthday, Chinese leader Xi Jinping claimed the Party “was chosen by history and the people” and declared the two inseparable.

Xi spoke to an orchestrated crowd of 70,000 at Beijing’s Tiananmen Square handpicked for the occasion, who raised red flags and clapped to cheer him in a display of Party loyalty.

Under the Party’s tight censorship system, there are limited means to gauge the broader sentiment of the Chinese public, who risk jail time for posting a wrong comment online that runs afoul of the ruling regime. But data from Global Service for Quitting the CCP, a New York-based advocacy group known colloquially as the “Tuidang Center”, suggests that faith in the Party seems to be receding.

The website of the organization, which began coordinating the grassroots efforts in 2004 for people to cut ties with the three main CCP affiliated organizations—the Communist Party, Communist Youth League, and Young Pioneers organizations—shows that nearly 380 million Chinese have done so and renounced the oaths they once made to devote themselves to communism.

The number currently stands at 380,033,002 as of July 6, marking an increase of roughly 25 million compared to October last year. Fearing the regime’s reprisal, many people adopt a pseudonym when publishing their withdrawal statements.

China has 95.1 million CCP members as of June, according to official data. This figure does not include those who have the Communist Youth League and Young Pioneers.

In 2004, The Epoch Times published the editorial series, Nine Commentaries on the Chinese Communist Party, detailing the Party’s history and inner workings since its inception. From there, the “Tuidang” movement was born, with people in China printing copies of the series and passing them among each other.

The New York-based Tuidang Center, which has more than 100 branches worldwide, has dubbed July 1 the “Tuidang Day,” or the “Withdrawing from the Party Day.”

Yi Rong, the organization’s director, said the number of withdrawals represents a growing awakening of the Chinese populace—a fact in itself “worth celebrating,” she said.

“The more than 10 years of the Tuidang movement has left the CCP shuddering with fear,” she told The Epoch Times.

One by one, she laid out the regime’s disastrous political campaigns over the past century, including: the Great Leap Forward, a massive push to boost the country’s steel production that led to a three-year famine and tens of millions of death; the Cultural Revolution; the recently-abolished one-child policy under which over 300 million abortions were carried out; its suppression of religious faith and stifling of Hong Kong’s freedoms.

“There are few families in China that have escaped its persecution,” she said.

Last year, amid the pandemic, the Tuidang Center initiated a petition calling for an end to Chinese communist rule. It has gathered more than 1.1 million signatures.

The CCP has only itself to blame, said Yi. The regime’s initial handling of the pandemic and continued coverup of the virus origin, she said, have shown the world its “shameless face” and as a result, made it increasingly unpopular on the world stage.

A volunteer at the Tuidang Center recently talked with a group of more than 20 Chinese college students in front of Manhattan’s Rockefeller Center. After she went into the damage the regime has brought to Chinese traditional heritage and asked them to draw a line from the Party, all except for one readily agreed, she told NTD, an affiliate of The Epoch Times.

The lone dissenter, a female student, eventually turned around and decided to quit the Party after being persuaded by her peers, according to the volunteer.

Yi saw the Tuidang movement as the best solution to peacefully dissolve the Party.

“Abandoning the CCP … and embracing what’s kind, this is the best choice for people,” she said.