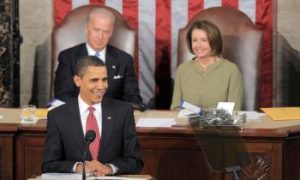 When President Obama announced plans for a high-speed and intercity passenger rail service, many applauded his ambitious decision, but critics say the costly endeavor will do little to benefit the country.

On Jan. 28, 2010, the president proposed an $8 billion economic stimulus package to fund a high-speed rail project that not only promised to promote economic expansion and new manufacturing jobs, but also to create a safe and efficient alternative form of travel.

“Imagine whisking through towns at speeds over 100 miles an hour, walking only a few steps to public transportation, and ending up just blocks from your destination. Imagine what a great project that would be to rebuild America,” said Obama on April 16, 2009.

Supporters of the project add that it will reduce dependence on foreign oil and better connect urban and rural communities across the country.

But the president’s plan won’t come cheap. It would invest more than seventeen times what the federal government has allocated into all forms of passenger rail over the last 10 years.

Competition for the $8 billion in grant money was fierce. The Federal Railroad Administration received 259 grant applications from 37 States and the District of Columbia requesting nearly $57 billion in funding.

Officials from Illinois—one of only three states that received grant money for the project (including California and Florida)—Governor Pat Quinn and U.S. Senator Dick Durbin (D-IL) said in a joint statement that “this historic investment in high speed passenger rail will begin to fulfill the President’s vision of rebuilding America and revitalizing the Midwest, while relieving congestion and improving energy conservation.”

However, those who oppose the President’s vision said that high-speed rail will not only cost tax payers much more than the $8 billion proposed, but will be too expensive for most people to enjoy.

“Americans may love the high-speed trains in France or Japan. Yet the average residents of those countries ride the high-speed trains less than 400 miles per year. Every taxpayer in those countries helps subsidize the trains, yet fares are so high that only the wealthy use them,” wrote Randal O’Toole, a senior fellow from the Cato Institute, a non-profit policy research foundation.