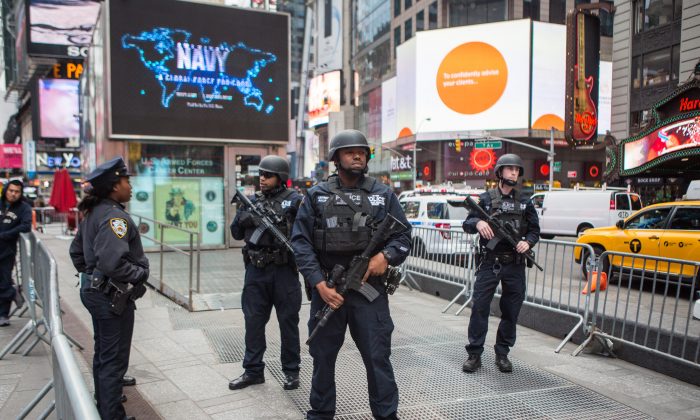 NEW YORK—With the nation still jittery over shooting massacres in California and Paris, New York City officials sought to assure revelers Tuesday, Dec. 29, that the New Year’s Eve celebration in Times Square will be the safest place in the world—heavily secured by thousands of New York Police Department officers, including a new specialized counterterrorism unit.

“Leave the worrying to the NYPD,” said James O’Neill, chief of the department. “People should feel safest this New Year’s Eve because we’re there.”

Police Commissioner William Bratton said there were no credible threats to the city ahead of the holiday. Yet officials also acknowledged that there were limits to what they could do to ensure security, especially outside the tightly controlled blocks at the heart of the celebration. In much of the city, the focus will be on fast responses to any emergency rather than preventive measures like security checkpoints.

“The ability to protect everything all the time everywhere is not possible in any venue anywhere in the world,” Bratton said Tuesday at a news conference in Times Square.

About 1 million people are expected to pack the blocks around Times Square to watch the 11,875-pound Waterford crystal ball drop. Partygoers trying to get close enough to see and hear the musical acts that perform throughout the evening will be screened with hand-held metal detectors twice—once when they enter one of the 14 access points to the secure zone and once when they enter pens where they must stay lest they lose their spots.

Outside that zone, revelers and vehicles can come and go as they please.

Nearly 6,000 officers will be assigned to the festivities. Visitors will see heavily armed counterterrorism teams and bomb-sniffing dogs. Rooftop patrols and NYPD helicopters will keep an eye on the crowd, and plainclothes officers will blend in with revelers. Newly graduated officers will take part.

“On New Year’s Eve, the department will be out in force,” Mayor Bill de Blasio said. “There will be a tremendous number of officers you will see and many you won’t see.”

The bomb squad and a unit specializing in chemical and biological threats will sweep hotels, theaters, construction sites, and parking garages. They also will patrol the Times Square subway station, and certain exits will be blocked off. The NYPD will rely on a network of thousands of closed-circuit security cameras blanketing lower Manhattan, parts of midtown Manhattan and the subway system. About 20,000 smartphones were handed out to officers this year that will allow police to quickly transmit information on potential threats.

“New Year’s Eve in New York City will be the safest place in the world to be,” said Chief James Waters, head of the counterterrorism unit.

And this year, a specialized counterterrorism unit of 500 highly trained officers will be deployed to respond to any emergency.

The unit was first formed after attacks in January at the French satirical weekly Charlie Hebdo. Bratton said the department is constantly evolving based on new information as well as the recent attacks in Paris and San Bernardino, California.

Carrie Underwood, Luke Bryan, Wiz Khalifa, Charlie Puth, and Demi Lovato are among the musical guests schedule to perform this year. When the clock strikes midnight and the ball drops, so will 1 ton of confetti—scraps of paper with well wishes for the upcoming year.

After the show, sanitation crews will get to work cleaning up from the celebration, working through the night to dispose of an estimated 50 tons of garbage, including confetti, party hats and other leftovers from the revelry.