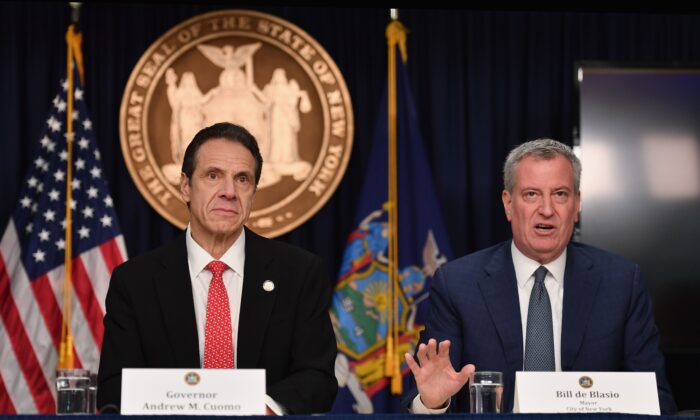 New York City Mayor Bill de Blasio said the state’s Gov. Andrew Cuomo should resign from his post if an independent investigation confirms some of the recent allegations made against him, including the nursing home scandal and sexual harassment claims.

State Attorney General Letitia James confirmed in a statement on March 1 that they are moving forward with an “independent investigation into allegations of sexual harassment claims,” that were made against the governor. The findings of the review will be disclosed in a public report.

De Blasio said Cuomo should “of course” resign if any of the recent claims are proven correct, during an interview with CNN’s Jake Tapper.

“I don’t see how anyone can function as a governor and have the trust of the people and the respect of the people, if they purposefully covered up the deaths of thousands of our seniors, our elders, family members, beloved family members who are gone,” de Blasio said on March. 1.

“If you cover that up, or if you did things for reasons that had to do with politics or contributions, and if you’ve sexually harassed young women in your employment, these are disqualifying realities. How could anyone look the people in the face after that?” he said. “If these allegations, if these charges are proven, there’s just no way he can govern.”

There are increasing bipartisan calls for Cuomo to resign or be impeached.

On March 2, six New York Democrats issued a letter calling for Cuomo’s impeachment over his handling of the state’s CCP (Chinese Communist Party) virus response and the mounting sexual harassment allegations against him. Cuomo, 63, has been accused of harassment by three women, two of whom are former aides. He has also been under fire for withholding COVID-19 death data from state lawmakers and the public.

As the fallout continued to grow, New York’s state legislature announced on March 2 that it had reached a deal to repeal the governor’s emergency powers. State Senate Majority Leader Andrea Stewart-Cousins and Assembly Speaker Carl Heastie, both Democrats, made the announcement but didn’t specify when a vote will be held.

Some members of the New York Congress are also now considering running against Cuomo in 2022 amid the growing scrutiny. Reps. Lee Zeldin (R-N.Y.) and Elise Stefanik (R-N.Y.) both indicated that they will consider a run against Cuomo, with Zeldin moving forward by making a statement on Twitter about his intention.

Meanwhile, Sen. Lindsey Graham (R-S.C.) defended Cuomo’s right to due process, saying he believes all sexual assault allegations should be treated the same, whether they are directed toward Democrats or Republicans. Graham cited the treatment of conservative Supreme Court Justice Brett Kavanaugh by Senate Democrats during his confirmation hearing.

“We had days and weeks of hearings, we had another FBI investigation, we took it seriously. And what should you do as Democrats regarding Cuomo? Do exactly what Republicans did, call for an independent investigation, take it seriously,” Graham told Fox News’ Sean Hannity.

New York state health officials underreported COVID-19-related nursing home deaths by as much as 50 percent in some places, according to a report released by Attorney General Letitia James. The 76-page report (pdf) released Jan. 28 follows an investigation by James’s office into claims of neglect of patients and other conduct that allegedly led to the deaths of nursing home residents and employees.

Not long after that report, a top aide to Cuomo apologized to Democratic lawmakers for withholding data on virus deaths in nursing homes in an effort to avoid scrutiny from federal prosecutors. The admission of the alleged coverup was made by Secretary to the Governor Melissa DeRosa during a video conference call with state Democratic leaders on Feb. 11, according to an audio recording obtained by the New York Post.

Cuomo’s office has denied the allegations of the first two women who came forward. In a statement on Feb. 28, he acknowledged that some of his interactions with women “may have been insensitive or too personal.” The statement maintained that Cuomo has “never inappropriately touched anybody” and said his office would cooperate with an investigation.

The governor has stopped short of a full apology over his role in the nursing home scandal while acknowledging that because they failed to answer questions from the public, the state created a void “filled with skepticism, and cynicism, and conspiracy theories which furthered the confusion.”

Jack Phillips and Isabel van Brugen contributed to this report.