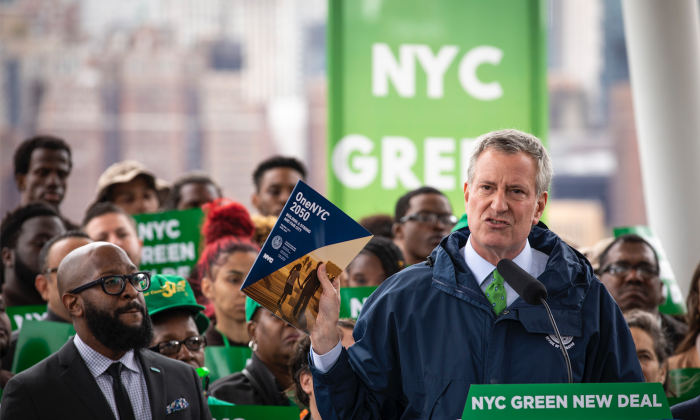 New York City Mayor Bill de Blasio holds up a copy of 'One NYC 2050' as he speaks about the city's response to climate change at Hunters Point South Park in the Queens borough of New York City on April 22, 2019. (Drew Angerer/Getty Images)
NY Politics

New York City Mayor Bill de Blasio on April 22 announced his own version of the controversial “Green New Deal” that was recently presented to Congress. The progressive plan aims to cut emissions from the city’s high rises and “ban” the classic glass and steel skyscrapers that make up the Big Apple’s skyline.

In an interview with MSNBC’s “Morning Joe,” de Blasio said they will put “strong mandates” for building owners to save energy, “the first of any major city on the earth” to do so. The radical move came as de Blasio announced a $14 billion attack on global warming, which he claimed would cause a nearly 30 percent additional reduction in emissions by 2030.

“Building owners, you got to clean up your act, you got to retrofit, you got to save energy. If you don’t do it by 2030, there will be serious fines, as high as a million dollars or more for the biggest buildings,” de Blasio said. “And this mandate is going to guarantee that we reduce admissions.”

The city’s government is planning to get all of its energy from renewable sources over the next five years, according to de Blasio. He said the biggest source of emissions in the Big Apple are buildings.

“We are going to ban the classic glass and steel skyscrapers, which are incredibly inefficient,” he said. “If someone wants to build one of those things, they can take a whole lot of steps to make it energy efficient, but we are not going to allow what we used to see in the past.”

At one point during the interview, de Blasio was asked about his SUV transportation from the Upper East Side at Gracie Mansion, where his home is, to a gym in Brooklyn.

“Let’s make clear, this is just a part of my life,” he said. “I come from that neighborhood in Brooklyn. That’s my home. I go there on a regular basis to stay connected to where I come from and not be in a bubble, that I think for a lot of politicians is a huge problem.”

The Green New Deal, pushed by Rep. Alexandra Ocasio-Cortez (D-N.Y.), is a resolution that urges Congress to hand the government a monopoly over the United States’s energy industry in order to move the nation entirely away from fossil fuels. The United States is the world’s top oil producer.

The deal calls for a 10-year mobilization that would, by one estimate, cost U.S. taxpayers as much as $93 trillion. As a comparison, the total projected government spending for the next decade is $66 trillion. In addition to vague promises of universal access to food and nature, the resolution calls for the removal of all gas-engine cars and upgrading or replacing every building in the country.

In announcing the new deal, de Blasio wrote on Twitter that we “face a moment of crisis” and that there’s “no plan coming from Washington to save our planet—we have to do it ourselves.” The mayor is a vocal opponent of President Donald Trump.