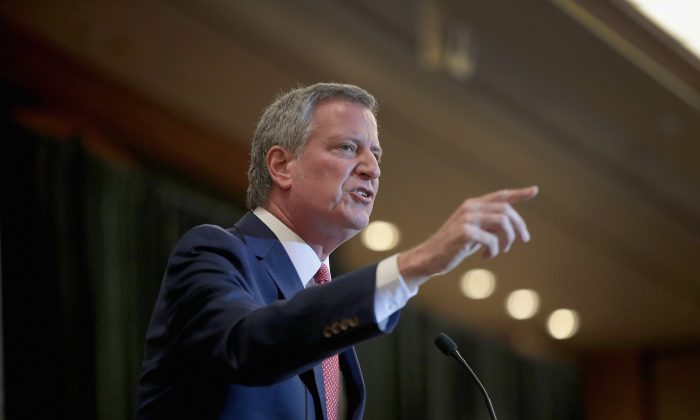 New York City Mayor and 2020 Democratic presidential candidate Bill de Blasio brushed off criticism for being out-of-state when a major power outage hit the city on July 13; he was campaigning in Iowa at the time.

De Blasio told CNN’s “State of the Union” on July 14 that traveling is part of the job of being a mayor, and that his responsibility as mayor is to make sure everything is “quickly handled” and that he communicated with those in the city to ensure that.

“When you’re a mayor or governor, you’re going to travel for a variety of reasons,” de Blasio told the network. “The important thing is to have the hand on the wheel, make sure things are moving effectively, and communicate to people.

“Even from where I was, I was able to do that right away with the people in New York City. So in the end, a CEO, a public sector or private sector, has to be able to lead wherever they were, and we got this done,” he said.

De Blasio—who announced his longshot presidential run on May 16—is polling at around 0.5 percent, according to an average of major polls calculated by Real Clear Politics.

New York Gov. Andrew Cuomo said that during incidents such as a major power outage, the mayor should be on the ground.

“Mayors are important. And situations like this come up, you know. And you have to be on-site,” Cuomo told CNN.

Cuomo cited his years working as governor of New York and said he could count the number of times he left the state on his fingers.

“I’m governor of New York; I have been for eight years. I can count the number of times I leave the state basically on my fingers,” he said.

“I think it’s important to be in a place where you can always respond, but look, everybody makes their own political judgment, and I’m not going to second-guess anyone either. I do my job the way I think I should do my job, and I leave it to others to do the same,” Cuomo said.

Multiple Twitter posts on de Blasio’s account on July 13 appeared to show him assessing the outage situation and communicating with others in the city.

“With the power back on, I’ve directed City agencies to investigate this evening’s blackout,” he said in one of his posts. “They’ll work with ConEd to get to the bottom of what happened tonight and prevent another widespread outage like this.”

The power outage stranded passengers on subways, gridlocked drivers that had to navigate the streets without traffic lights, and brought the curtain down on some Broadway shows.

It stretched 30 blocks from Times Square to the Upper West Side and left about 73,000 customers without power on the night of July 13 for about four hours.

Con Edison CEO John McAvoy said a problem at a substation caused the power failure at 6:47 p.m. Electricity was restored to customers and businesses affected by the outage by about midnight, according to a statement from the utility.