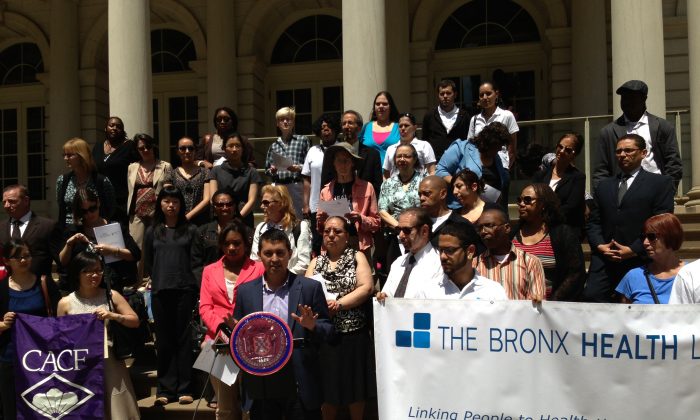 Anthony Feliciano, director of the Commission on the Public's Health System, speaks to the press on the steps of the City Hall in Downtown Manhattan on June 5, 2013. (Ivan Pentchoukov/The Epoch Times)
New York

The cuts threaten the closure of four schools-based health centers, and a reduction in staff on immunization teams, as well as at the East Harlem Asthma Center of Excellence Outreach. There are also cuts to child health clinics, the Infant Mortality Reduction Initiative, mental health care for kids under 5, and HIV/AIDS testing and support services.

Representatives from various community groups, city council members, and local residents urged the City Council to use discretionary funds to restore the cuts to healthcare. Discretionary funds are unallocated funds apportioned to each council member that may be used to fund city programs that face cuts from the mayor’s executive budget.

“These preventative services are a vital public resource to New Yorkers, especially low-income, immigrants and communities of color, families and students,” said Anthony Feliciano, director of the Commission on the Public’s Health System. “Mayor Bloomberg was not willing to ensure these vulnerable communities are cared for, but City Council can still step in and vote to restore these funds.”

As a result of the proposed cuts of almost $940,000, four schools-based health centers are at risk of closing, one in each borough. The four centers serve more than 8,000 students at a cost of approximately $120 per student.

“The difference in services is dramatic,” said Lorraine Gonzales-Camastra, director of health policy at the Children’s Defense Fund. “It doesn’t make any fiscal sense.”

The school-based health center at the Franklin K. Lane Campus costs $278,000 annually. Under the proposed cuts, the center would be closed and replaced with two nurses, whose salaries would cost approximately $200,000.

Schools-based health centers can reduce emergency visits in a community, eliminate racial and ethnic health disparities, and support academic advancement for students, according to Gonzales-Camastra’s testimony to the New York City Council. An average emergency room visit costs nearly $2,000 according to a policy brief from the Children’s Defense Fund.

There are 120 school-based health centers in New York City.