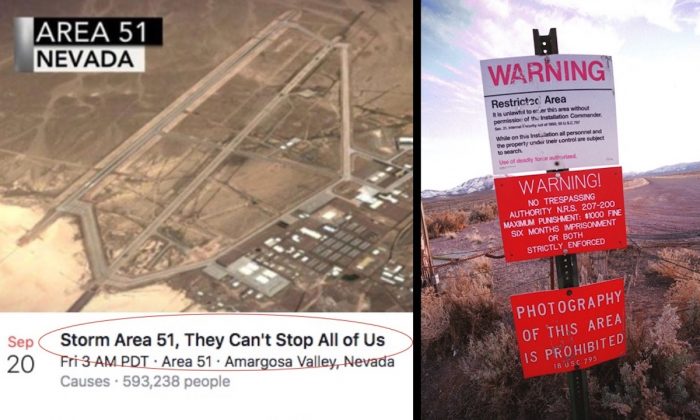 More than 850,000 people have now signed up to the “Storm Area 51” event as interest mounts in what appears to be a satirical ploy to raid the secretive military facility and “see them aliens.”

“If we naruto run, we can move faster than their bullets. [Let’s] see them aliens,” the event said in the description of their page, referring to the popular Japanese anime series “Naruto” in which characters run with arms stretched behind them.

Access to the facility remains highly restricted. According to inverse.com, about the closest place interested parties can get to on land to catch sight of Area 51 is Tikaboo Peak, around 26 miles away. But now the hundreds of thousands of “Storm Area 51, They Can’t Stop All of Us” participants appear to want to get far closer.

The assembly point for the Area 51 raiders is Area 51 Alien Center, a restaurant and souvenir shop located near the intersection of US-95 and Nevada State Route 373 in Amargosa Valley. It’s got 3.5 stars out of 5 on Trip Advisor and such glowing reviews on Google as “Such a cute stop in the middle of nowhere!” and “the restrooms are clean & neat” and “had one of those put your head on/in alien figure for photo things.”