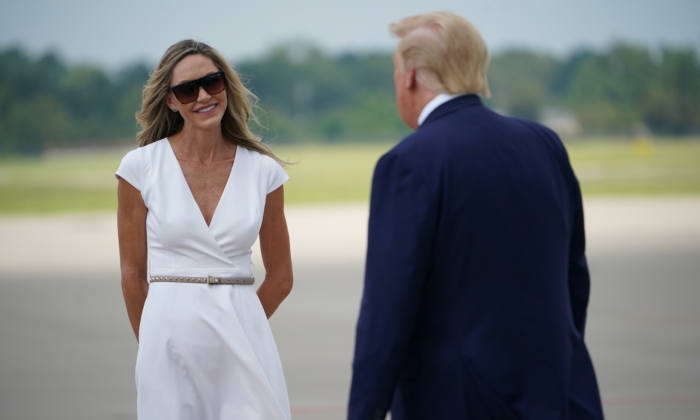 North Carolina GOP Chairman: Lara Trump Would Be Candidate to Beat If She Ran for US Senate

The chairman of the Republican Party in North Carolina believes Lara Trump would be the candidate to beat if she decided to run for the U.S. Senate seat being vacated by the retiring Sen. Richard Burr (R-N.C.) in 2022.

“She would have immediate attention and interest from across the state. She did a fantastic job representing the president when she was down here as a surrogate throughout the last four years, and campaigned very hard for him in ‘16 and ‘20. She’s very beloved here down in North Carolina,” the state’s Republican Party Chairman Michael Whatley told The Epoch Times.

“Everybody at this point is just waiting to see what she’s going to do.”

Rumors of Trump’s potential run for the Senate in the Tar Heel State percolated as recently as last year. Sen. Lindsay Graham (R-S.C.) reignited the conversation over the weekend, touting her as a replacement for Burr, who had voted to impeach President Donald Trump, Lara Trump’s father-in-law. Graham said Lara Trump is the “future of the Republican Party” and preemptively threw his support behind a hypothetical run.

“The biggest winner, I think, of this whole impeachment trial is Lara Trump,” Graham told Fox News. “My dear friend Richard Burr, who I like and been friends with a long time, just made Lara Trump almost a certain nominee for the Senate seat in North Carolina to replace him if she runs.”

The Senate acquitted Trump of the charge that he incited an insurrection. Burr was among seven Republicans who voted in favor of conviction, drawing a swift public rebuke from Whatley followed by a vote censuring him by the North Carolina GOP.

In a written statement released following the trial, Burr says that although he believes the trial was unconstitutional, he was convinced by the Democrat’s arguments that Trump was responsible for the Jan. 6 events.

President Trump won North Carolina by 1.3 percent in 2020. A run by Lara Trump would nationalize the race, Whatley said, adding that even if Lara Trump decides not to run, any Republican candidate would come out of the primary contest with a “North Carolina first, America first agenda.”

“The Democrat, whoever comes out of their primary, is going to be running on the Biden-Pelosi-Schumer agenda. We think in North Carolina that bodes very well for the Republican candidate,” Whatley said.

Sources close to the Trump family are confident Lara Trump would win if she decided to run.

“She would immediately galvanize conservative support, and not just because her last name is Trump,” a former Trump 2020 adviser with close ties to the Trump family told The Epoch Times. “Lara knows North Carolina and North Carolina knows her. If she decides to run, she’d bring an unmatched ability to connect with voters, while also being able to raise the money necessary to compete in a close election.”

Lara Trump is married to Eric Trump. She is a native of Wilmington, North Carolina.