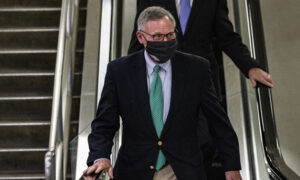 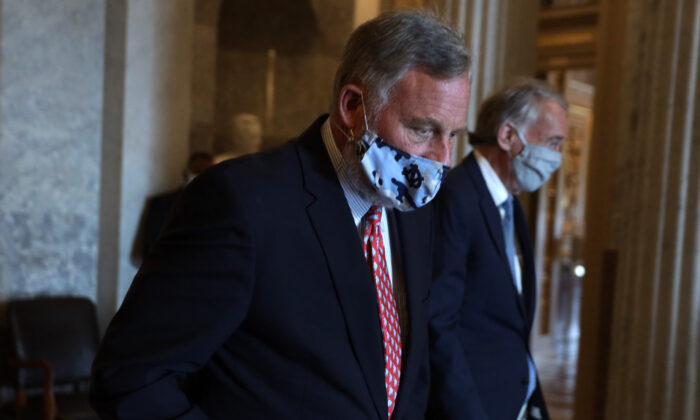 Sen. Richard Burr (R-N.C.), chairman of Senate Select Committee on Intelligence, leaves after a vote at the U.S. Capitol in Washington on May 14, 2020. (Alex Wong/Getty Images)
Politics

The North Carolina Republican Party said on Monday that it had voted unanimously to censure Sen. Richard Burr (R-N.C.) for his vote to impeach former President Donald Trump.

“The North Carolina Republican Party Central Committee voted unanimously to censure Senator Richard Burr for his vote to convict former President Trump in the impeachment trial which he declared to be unconstitutional,” the party said in a statement.

The group said that it did not support the Senate impeachment trial as it believes that the chamber did not have the authority under the Constitution to impeach a former president. The Senate on Saturday ultimately voted 57-43, which resulted in Trump’s acquittal. Sixty seven votes were needed for a conviction.

“Now that the Senate has voted to acquit President Trump, we hope that Democrats will set aside their divisive partisan agenda and focus on the American priorities of tackling the COVID-19 pandemic, safely reopening schools, and restarting the economy.”

Burr was one of the seven Republican senators who joined their Democrat colleagues to convict Trump on the impeachment charge that he “incited” the Jan. 6 breach of the U.S. Capitol.

In a statement following the trial, Burr said that although he believes the trial was unconstitutional, he was convinced by the Democrat’s arguments that Trump was responsible for the Jan. 6 events.

“The President promoted unfounded conspiracy theories to cast doubt on the integrity of a free and fair election because he did not like the results. As Congress met to certify the election results, the President directed his supporters to go to the Capitol to disrupt the lawful proceedings required by the Constitution. When the crowd became violent, the President used his office to first inflame the situation instead of immediately calling for an end to the assault,” Burr said in his statement.

“As I said on January 6th, the President bears responsibility for these tragic events. The evidence is compelling that President Trump is guilty of inciting an insurrection against a coequal branch of government and that the charge rises to the level of high Crimes and Misdemeanors. Therefore, I have voted to convict.”

Burr’s press contacts did not immediately respond to The Epoch Times’ request for comment.

Burr is not the only Republican lawmaker to face backlash for his decision to impeach Trump. Other Republicans who voted to impeach or convict the former president have also been censured by their state Republican parties or faced threats of primary challenges.

Burr said in 2016 that would not be seeking reelection in 2022. Lara Trump, the former president’s daughter-in-law, has been tapped as a strong candidate to succeed his seat. Reports of Lara Trump considering a senate run began emerging as early as November last year.

A former Trump 2020 adviser with close ties to the Trump family previously told The Epoch Times that they believe Lara Trump would “immediately galvanize conservative support” if she chose to run.

“She would immediately galvanize conservative support, and not just because her last name is Trump,” the adviser said. “Lara knows North Carolina and North Carolina knows her. If she decides to run, she’d bring an unmatched ability to connect with voters, while also being able to raise the money necessary to compete in a close election.”

A former Trump White House official shared similar views, telling The Epoch Times that they believe Lara Trump “will trample the competition in a Republican primary.”

“And as far as the general goes, remember North Carolina is a state that former President Trump won twice, and Lara probably has room to grow that support with independents who value a softer tone,” the official said.