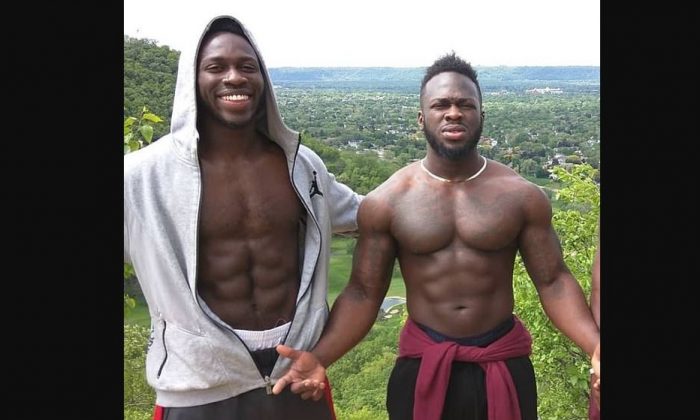 Abel Osundairo (L), and his brother Ola Osundairo, in a file photo. The Nigerian brothers were arrested in connection with the alleged attack on "Empire" actor Jussie Smollett but were released after reportedly telling detectives Smollett paid them to stage the attack. (Team Abel/Instagram)
US News

The two Nigerian brothers who were arrested in connection with the alleged assault against “Empire” actor Jussie Smollett in Chicago are no longer suspects in the case after telling the police that they were paid to stage the attack, according to new reports.

The brothers, Ola and Abel Osundairo, reportedly told detectives Smollett paid them $3,500 before they left for Nigeria on Jan. 29, the day the attack was reported.

The sources said one of the brothers held a rope and poured bleach on Smollett while the other wore a plain red hat and yelled slurs at Smollett.

New: Sources—The brothers were paid $3,500 prior to leaving for Nigeria and were promised an additional $500 upon their return. @cbschicagohttps://t.co/22zRPCcYTe

Smollett allegedly rehearsed the attack with the brothers before it was staged on Jan. 29. He also gave the brothers money to buy the rope, which was purchased from the Crafty Beaver Hardware Store on Jan. 25, CBS reported. The hat was bought at a beauty supply store.

Sources also told Fox 32 that the brothers told detectives that Smollett paid them for the staged attack. The broadcaster said a receipt found by the police in the brothers’ apartment indicated they bought the rope at Ace Hardware.

According to the Chicago Tribune, the older brother pleaded guilty to aggravated battery in 2012 and was sentenced to two years of probation for being one of five people who stabbed a 17-year-old in 2011. The younger brother was ticketed for driving under the influence in 2015.

The brothers appear to have moved to the United States at different times, with one attending high school here, while both attended Quincy University, a small liberal arts college in Illinois. Both owe tens of thousands of dollars in student loans. They filed for bankruptcy in 2016, saying they had a party and decoration store but it was dissolved because it was “operating at a loss.”

NEW: Sources say at least one of the brothers purchased the rope used in Jussie Smollett incident at Crafty Beaver hardware store the weekend of Jan 25th.

Smollett initially claimed that he was attacked at 2 a.m. on Jan. 29 by two men who were wearing ski masks. He said the men were white and that they yelled “this is MAGA country,” apparently in reference to President Donald Trump’s slogan “Make America Great Again.”

During an interview with “Good Morning America” last week, Smollett expressed frustration that some people didn’t believe his account.

“It feels like if I had said it was a Muslim or a Mexican or someone black I feel like the doubters would have supported me a lot much more,” Smollett said. “And that says a lot about the place where we are as a country right now.”

The Chicago Police Department said amid the slew of reports that police haven’t found any evidence that the attack happened as described by Smollett but thus far haven’t confirmed the incident “being a hoax.” The spokesman, Anthony Guglielmi, has also described Smollett as “the alleged victim.”

One report over the weekend claimed the case could go to a grand jury but a police spokesman told Fox News that Smollett would need to be questioned before he could answer a question regarding the report.

Responding to the question about the #smollett case going to a Grand Jury, CPD Spox said: We have some information that needs to be corroborated and verified with Mr. @JussieSmollett before I can answer this question.

Police said on Feb. 17 that they’re seeking a follow-up interview with Smollett when the new evidence came to light after the brothers were questioned.

“While we are not in a position to confirm, deny, or comment on the validity of what’s been unofficially released, there are some developments in this investigation and detectives have some follow-ups to complete, which include speaking to the individual who reported the incident,” Guglielmi said in a statement.

Smollett’s lawyers said late Feb. 16 that the actor felt “victimized” by reports that he played a role in the assault, adding that, “Nothing is further from the truth and anyone claiming otherwise is lying.”

Smollett admitted to knowing one of the Nigerian brothers and his lawyers said he hired the man to help him train for a music video. Another brother has reportedly appeared in “Empire.”

Pamela Sharp, a spokeswoman for Smollett, said Feb. 17 that there were no updates “as of now.” Another spokeswoman, Anne Kavanagh, later said she couldn’t comment on whether Smollett had agreed to another interview.

Among those reacting to the latest developments was Donald Trump Jr., President Trump’s son, who noted that many people who initially issued statements on the attack quietly deleted them, including presidential contender Sen. Kamala Harris (D-Calif.).

In another Twitter post, he added: “It appears that Jussie Smollett tried to manufacture a hate crime to make Trump supporters look bad and most of the media not only uncritically accepted his lies as facts for weeks but attacked those who questioned the validity of his false story.”