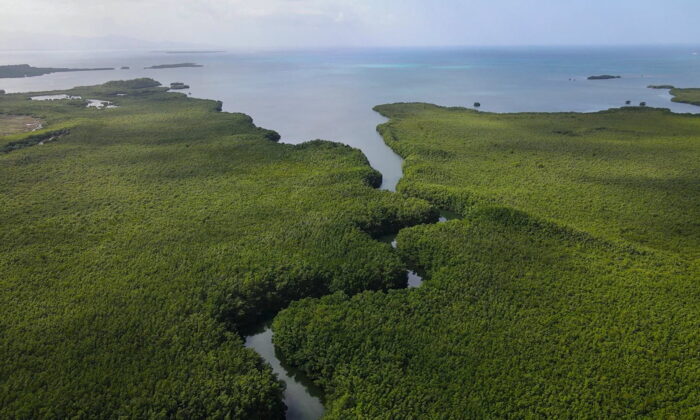 The mangroves of Guadeloupe, a French archipelago in the Caribbean, where the unusually large bacterium Thiomargarita magnifica was found, in an undated handout image. (Hugo Bret/U.S. Department of Energy's Lawrence Berkeley National Laboratory/Handout via Reuters)
Science News

Researchers have found a new bacteria species that is millimeters long and visible to the eye, challenging a previous understanding that one needs a microscope to see a bacterium.

“It’s 5,000 times bigger than most bacteria. To put it into context, it would be like a human encountering another human as tall as Mount Everest,” said one of the authors, Dr. Jean-Marie Volland in the media release of the study.

Apart from challenging preconceptions that bacteria are microorganisms that can only be seen with a microscope, the researchers also found it had features previously believed to only be present in complex living organisms.

Examinations of T. magnifica found the bacteria’s DNA was not free-floating in the cell as it is in other bacteria. Rather, its genetic material was enveloped in structures with membranes—a feature previously thought to only be present in cells of more complex organisms such as animals and plants.

Biology currently classifies cells into two types; prokaryotes and eukaryotes. Eukaryotes make up cells in complex multicellular organisms such as humans and plants, with the insides of the cells compartmentalized by membranes.

Bacteria are prokaryotes. Previously found bacteria had no membrane inside the cell, with the DNA and other components freely floating in the cytoplasm, and no sectioning of the cell at all.

“Because it segregates its genetic material in membrane-bound organelles (cellular structures), T. magnifica challenges our concept of a bacterial cell,” wrote the authors of the study.

However, because the bacteria’s ribosomes, a cellular structure used to make proteins, are made from the 16s gene just like all prokaryotes rather than eukaryotes that have ribosomes made from the 18s gene, the scientists determined that it was still a prokaryote, and therefore a bacterium.

The bacterium was initially discovered by Dr. Olivier Gros in 2009 whilst looking for microorganisms that can metabolize sulfur in mangroves.

“When I saw them, I thought, ‘strange,’” Gros said in the study’s media release.

“In the beginning I thought it was just something curious, some white filaments that needed to be attached to something in the sediment like a leaf.”

However, subsequent examinations revealed that the “white filaments” were not made up of many cells, but rather, each  was a single-celled organism.

Speculating on why the bacteria grow so big, the authors reason that the extra membranes in the bacteria give the organism an extra edge, to allow it to conduct certain biochemical pathways more efficiently, allowing it to grow to a relatively monstrous size.

Further, the authors believe T. magnifica’s much larger genome, with around 4 times the number of genes as compared to average prokaryotes may also contribute to its size.

Considering that scientific prejudice meant that it took “more than a century” for giant viruses—viruses that are significantly bigger than most viruses with sizes comparable to some bacteria—to be discovered, the authors concluded that their study “suggests that large and more complex bacteria may be hiding in plain sight.”