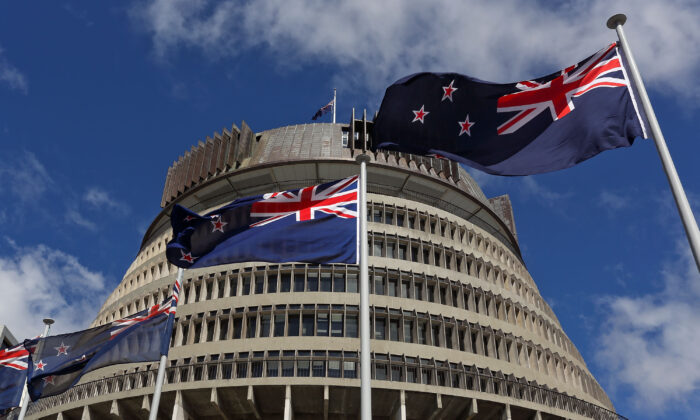 New Zealand flags fly in front of The Beehive during the Commission Opening of Parliament in Wellington, New Zealand, on Oct. 20, 2014. (Hagen Hopkins/Getty Images)
Australia

The New Zealand (NZ) government has passed a law that will allow people to change the sex recorded on their birth certificates to match their self-identified gender without the need for gender reassignment treatment or surgery. But a women’s rights group has successfully put a dent in the law to ensure that some protections for women remain.

NZ Internal Affairs Minister Jan Tinetti said it was a “proud” day for the country after the parliament voted “in favour of inclusivity and against discrimination,” The Guardian reported.

The new bill removed the requirement from an existing law, passed in 2018, for people to prove they were undergoing gender reassignment treatment that had already allowed people to self-identify their gender on birth certificates.

Speak Up for Women, an organisation that formed in opposition to the 2018 bill, campaigned against the passage of the 2021 bill, and were able to ensure some protections for biological sex.

“Our goal has always been the protection of women’s rights in law,” the group wrote on Twitter, adding that the new law represented an “erosion of those rights.”

The Births, Deaths and Marriages bill (sex self-ID) passed unanimously in the House today. Our goal has always been the protection of women’s rights in law. Although this new law represents an erosion to those rights, we’re glad that our advocacy led to the inclusion of clause 80

However, Speak Up for Women ensured some protections that might help keep trans-women out of spaces reserved for biological women, and ensured that service providers can still offer services on the basis of biological sex.

There have been many reported instances of trans-women demanding rights to access spaces traditionally reserved only for women, including bathrooms and sporting teams.

Speak Up for Women is made up of a diverse group of women concerned about the impact of gender identity politics on the rights of women and girls. The group states on its website, “We quickly realised that there is no one advocating for women across the board. Traditional women’s groups now focus heavily on gender identity and what is left is a void of services and advocates for women.”

“Regardless of what parliament decides to record on birth certificates, biological sex will go on existing and mattering; everyone knows which sex class can get pregnant and the associated issues and discrimination,” the group said in a statement on Dec. 9.

“The female experience cannot be legislated out of existence. This law simply means New Zealand is losing protections for women and children, data and opportunities to redress inequality.”

Similar laws have been both passed and rejected in other countries with some requiring proof of treatment or surgery has commenced.

“If we shut down the full expression of topics such as this, we won’t benefit from considering a full range of views as we debate complex policy and ideas and I do worry about the societal impacts of people feeling that their views are no longer able to be expressed,” Nicola Grigg, the National Party’s spokesperson for women, said.