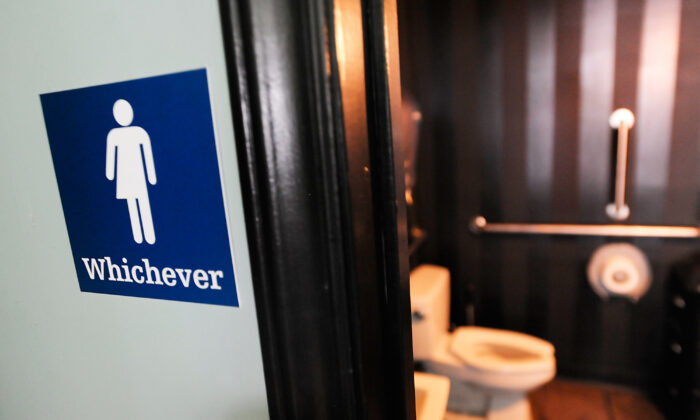 A gender neutral sign is posted outside a bathrooms at Oval Park Grill in Durham, North Carolina on May 11, 2016. (Sara D. Davis/Getty Images)
By Bill Pan

According to News 9 WOAW, 18-year-old Austin Sauer was arrested on Thursday on charges of child enticement, fourth-degree sexual assault, and exposing genitals to a child, the sex of whom has not been reported.

The Wisconsin state law defines fourth-degree sexual assault as “sexual contact with a person without the consent of that person.”

An officer from the Oneida County Sheriff’s Department told the local ABC affiliate that the incident took place in a gender-neutral bathroom at Rhinelander High School. The school has promptly closed that bathroom.

In a statement released to WOAW, Rhinelander School District Superintendent Kelli Jacobi said that “both students went into the bathroom voluntarily.”

“This was not a random incident, as both students went into the bathroom voluntarily,” she said. “The male student will no longer be able to be on school grounds, and the gender-neutral bathroom is no longer available to students.”

Sauer was released on a $1,500 signature bond, according to WAOW.

WAOW reported on the opening of Rhinelander High’s gender-neutral bathroom in October 2019. The school turned a former men’s bathroom into a gender-neutral space in order to make meet the increasing needs of students coming out as transgender or “gender expansive.”

One transgender male student told the news outlet at that time that the gender-neutral bathroom made a big difference in his life because he no longer had to go to the other floor to use the nurse’s bathroom, which sometimes made him late for the class.

Earlier this year, the U.S. Court of Appeals for the Ninth Circuit affirmed a lower court’s decision in a privacy lawsuit against a public school district in Dallas, Oregon. A panel of three judges ruled in favor of the school district, saying that it did not violate federal law or constitutional rights with a “student safety plan” that allows transgender students to use bathroom, locker, and shower facilities that “match their self-identified gender.”

Meanwhile, the U.S. Supreme Court last May refused to hear an appeal in a case from Pennsylvania, in which lower federal courts upheld a school district’s policy of permitting transgender students to use restrooms or locker rooms matching their gender identity. Four students, who felt uncomfortable with the policy, sued the school district on the basis that it violated their privacy rights and federal laws under Title IX of the Education Amendments of 1972.