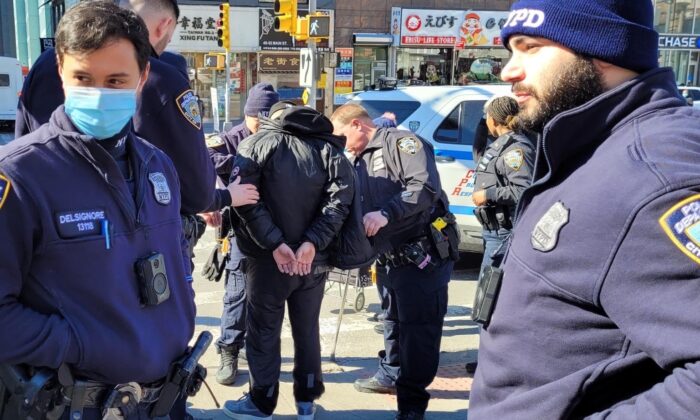 An Asian man from Flushing who has been charged with hate crimes could face additional charges after a New Yorker filed a police report saying he was punched by the suspect on Feb. 10.

That day marked the start of a rampage in the Flushing neighborhood of New York, which is popular among Chinese immigrants, when 32-year-old suspect Zheng Buqiu allegedly began vandalizing public information stands raising awareness of the Chinese Communist Party’s long-running persecution against faith group Falun Gong.

Zheng was eventually arrested around noon on Feb. 15, but not before he allegedly toppled and kicked tables, punched and tore up posters, and scattered leaflets at the stands on numerous occasions on four separate days since the attacks started on Feb. 10.

Police have charged Zheng with a hate crime and criminal mischief in the fourth degree. He was released on bail on Feb. 16.

On Feb. 17, Guo Jinfu, 59, one of the volunteers manning the information stands, filed a report at the NYPD’s 109th Precinct detailing Zheng’s hostile actions against him.

“I saw a young guy, bare-chested with tattoos all over his arms, sitting on the floor and tearing up Falun Gong materials,” Guo said, recalling what happened during his encounter with Zheng on the sidewalk near the intersection of Main and 41st streets.

Guo said he tried to convince Zheng to stop what he was doing, but the suspect didn’t listen.

After tearing up the printed materials, Zheng picked up a table and threw it on the floor, according to Guo.

Guo said Zheng then punched him in the stomach, and the blow forced him back a step.

“I felt my stomach was hurting. If I were a woman, I would have fallen to the ground [after taking the punch],” Guo said.

Guo said he initially didn’t want to report Zheng to the police but changed his mind after learning that Zheng allegedly continued his aggression repeatedly until he was arrested.

“He was attempting to undermine the faith of Falun Gong. It was hatred. It was not against someone in particular. I had to step forward,” Guo said.

“Now some of the older [volunteers] manning the stands are a bit terrified.”

Falun Gong, also known as Falun Dafa, is a spiritual practice consisting of meditative exercises and moral teachings based on truthfulness, compassion, and tolerance. The group’s popularity surged in China in the 1990s, with estimates putting the number of adherents at 70 million to 100 million by the end of the decade.

The practice’s popularity drew the ire of then-Chinese Communist Party leader Jiang Zemin, who launched a nationwide campaign to persecute Falun Gong adherents beginning in July 1999. Since its founding, the Party has demonstrated a history of homicidal persecution of those with religious faiths, in an attempt to force citizens to submit to the Party’s Marxist-Leninist-based doctrine of dialectical materialism.

Inside China, millions of Falun Gong adherents have been detained inside prisons, labor camps, and other facilities in China, with hundreds of thousands tortured while incarcerated, according to the Falun Dafa Information Center. Many of them have become victims of China’s state-sanctioned practice of forced organ harvesting.

Most recently, there have been similar attacks on Falun Gong information booths in Hong Kong in 2020 and 2021.