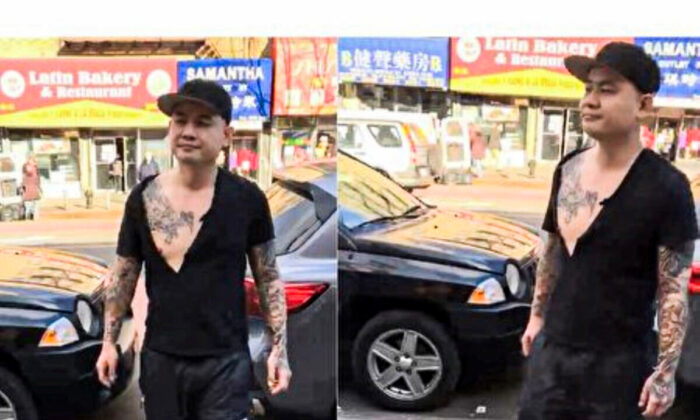 The tattooed suspect attacks two Falun Gong booths promoting the withdrawal from the CCP in Flushing, NYC, on Feb. 10, 2022. (Courtesy of Xu Weiguo)
Crime and Incidents

A tattooed Asian male on Feb. 10 attacked two information booths in New York City’s Flushing neighborhood that had been set up to raise awareness about the Chinese Communist Party’s (CCP) long-running persecution of the spiritual group Falun Gong.

The incident, which echoes similar harassment campaigns targeting the group’s activities in the city and elsewhere, is believed to have been orchestrated by the CCP in a bid to intimidate adherents of the practice.

At around 3:20 p.m. on Feb. 10, a tattooed man wearing all black approached one of the booths in front of the Golden Shopping Mall on Flushing’s Main Street and punched one of the display boards, without saying a word, according to witness Xu Weiguo, a volunteer manning the booth.

The man then proceeded to throw a table containing information material onto the ground and stomped on the fallen display board with his feet, she said. The man appeared to be in his 20s and looked gangster-like, she said. He wore a black cap and black T-shirt revealing tattoos on his chest, and tattoo sleeves on both arms, footage of the incident obtained by The Epoch Times shows.

“That guy even tore up flyers while he was sitting on the ground,” Xu said. “He carried off the [broken] board when he left, afraid that evidence left might be used against him.”

Earlier in the day, the same man had similarly vandalized another information station down the road outside Flushing Public Library.

Lily Wang, a volunteer at that booth, told The Epoch Times that the assailant made a sudden move toward the information table and started smashing it.

“He threw all the flyers on the table away and kicked the table,” she said.

Footage of the incident confirms these events.

Wang and another volunteer Zhang Shuzhen shouted at the attacker, “Stop doing that!” But the man didn’t listen, Wang said.

The two women then blocked the man from damaging more items. A Westerner who was passing by joined in, successfully preventing the suspect from continuing his attack.

The man then left, cursing, according to Wang.

But he later returned, this time with his shirt off revealing his tattooed chest, and attempted to damage items again. The volunteers, however, were able to block him a second time.

About an hour after the afternoon attack outside Golden Shopping Mall, police arrived at the scene for investigation.

The New York City Police Department (NYPD) told The Epoch Times the investigation is ongoing, and there’s no additional information at this time.

Representatives of the advocacy group operating the information booths denounced the attack while urging the NYPD to thoroughly investigate the incident.

“We condemn the CCP thugs for the malicious attack,” Yi Rong, president of the Global Service Center for Quitting the CCP, said in a statement.

Yi described the attack as a “hate crime” committed by the CCP against adherents of Falun Gong.

For over two decades, the communist regime in China has perpetrated an expansive campaign of repression against adherents of Falun Gong. Millions of adherents in mainland China have been thrown in detention facilities, where they’re subjected to torture, forced labor, and organ harvesting.

But the repression has extended beyond China’s borders, with the CCP and its proxies targeting overseas Falun Gong practitioners who raise awareness about the persecution. Rights organizations have dubbed this a campaign of “transnational repression” that aims to silence and intimidate the regime’s critics abroad.

This is not the first time Falun Gong practitioners have been targeted in Flushing.

In 2008, the site was the center of a campaign of sustained violence against adherents manning information stations, which lasted several months. Mobs of Chinese nationals assaulted, punched, berated, and threw rocks at Falun Gong practitioners.

The months-long violence turned out to be connected to the Chinese consulate in New York. Peng Keyu, the Chinese ambassador in New York at the time, admitted in an undercover phone call to instigating pro-CCP groups to launch a series of assaults on Falun Gong adherents in the area.

As the assailant was walking away after the first attack outside the library on Feb. 10, he made a gesture to a person across the street, according to the volunteers.

In 2013, a woman was convicted of assaulting a Falun Gong practitioner in Flushing.

Michael Yu, a volunteer at the information center in Flushing, said the incident revealed the “gangster-like nature” of the CCP and its fear of people learning the truth about its brutal persecution in China.

The attack is a blatant violation of religious freedom enjoyed in the United States, Yi said, adding that she hoped the suspect would be brought to justice.

The article has been updated with a response from the NYPD.