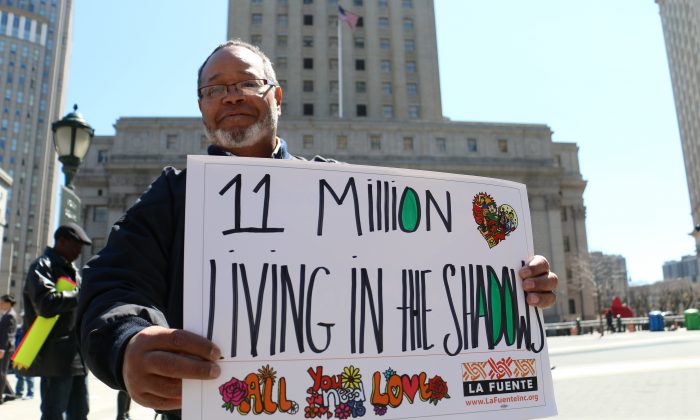 NEW YORK—April 10th marked roughly a year since the Senate passed a bill called S. 744 that, among other things, would provide amnesty to an estimated 11 million undocumented immigrants in the United States.

While the bill passed the Senate, it did not even come up for a vote in the House of Representatives, which means it was never signed into law.

“We are still waiting for the House Republican leadership to allow a vote on an immigration reform bill and they have failed to do so,” said Steven Choi, executive director of the New York Immigration Coalition.

Choi was joined by a coalition of immigrant groups at Foley Square for a national day of action on immigration reform. They called for a path to citizenship for undocumented immigrants, and an end to deportations, which they say happen at a frequency of about 1,000 a day.

“These people are not statistics. They are fathers and mothers, brothers and sisters, people that we know and love and hold dear, and now they’re being separated form their families, perhaps forever,” said Choi.

He and others argue that if immigrants are able to obtain citizenship they will be able to step out of the shadows, and be able to fully contribute to both the economy and the community.

On the other side of the debate are people who say it is unfair to immigrants who came here legally to grant amnesty to those who didn’t. More extreme opponents argue that granting amnesty would increase the unemployment rate for U.S. citizens, create stiffer competition for jobs, and aggravate the social welfare safety net.

“All [S. 744 ] does is legalize 11-18 million illegal aliens who are now in the country, and has provisions that another 20 million can come in in the next few years,” said Jim MacDonald, a member of New Yorkers For Immigration Control and Enforcement. “It is absolutely the last thing that America needs.”

Immigration advocates argue the jobs these immigrants are taking are not jobs that Americans want, and the U.S. economy has come to rely on the workforce of immigrants.

“Until Washington gets their act together we here in New York City are going to make sure that we prove our leadership,” said Council member Carlos Menchaca, chairman of the City Council Immigration Committee and co-sponsor of the legislation.

The question now is how to implement the IDs. If they are not widely used, the ID’s could become a symbol of undocumented status, and hinder rather than help undocumented immigrants.

To avoid this, City Council members will be holding hearings in the coming months to get community feedback before the details of the law are finalized.