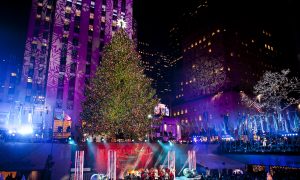 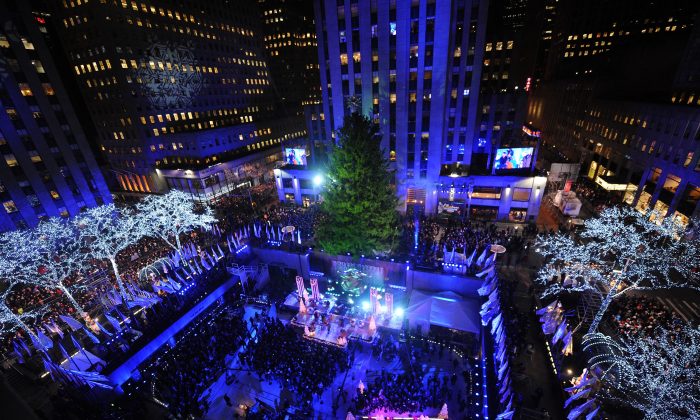 NEW YORK—By the end of October, lights are strung up over the main streets of neighborhoods all over the city in festive configurations. You have the standard bells, snowflakes, and shooting stars flanking snowmen—strands that, when lit, read, welcome to such and such neighborhood. Some opt for abstract, multicolored swirls and geometric shapes.

Soon, streets are lined with wreaths, ribbons, and evergreens for sale. Parks are filled with pop-up shops, public plazas hold tree and menorah lightings, and festive programming is scheduled for most cultural institutions. Every year, it runs like clockwork. And the holiday season in New York is iconic.

For Cathy Goosmann from Sunnyside, Queens, the holiday season begins before October. It starts with her grandson’s birthday, then her daughter’s. Before you know it, it’s Halloween, then Thanksgiving, and it just builds and builds until mid-February.

“It’s a straight shot to Valentine’s Day,” she said with a laugh. “I get very excited.”

Goosmann was born in Manhattan, but moved to Japan and lived there for many years. When she moved back to the city in 1999, she realized how much she yearned for all the little markings and makings of New York City—how the city celebrates the winter holidays being a major part of what she loves.

“It was brighter to me because I had been away for so long,” Goosmann said.

“I try to at least get to each one once,” Goosmann said. Now many of these visits have become annual traditions with friends.

On Wednesday, Goosmann and her sister visited the Union Square Holiday Market, as they do every year for her sister’s birthday. A few days before, she went gift shopping for the first time at the LIC Flea & Food Holiday Market.

“I like the independent shops. It’s just a different feel,” Goosmann said, adding that she enjoyed being able to support local businesses. It helps that the lights are up in her neighborhood now too, from private homeowners to the glowing “Welcome to Sunnyside” gateway sign on Queens Boulevard.

“I’m grateful for all the decorations, it lights the place up—I love them. The more lights, the better,” she said. “My building went crazy, and the lobby is gorgeous.”

Once the lights go up, it’s a sign to go gift shopping.

Much of the festive appearance of New York City stems from the work Business Improvement Districts (BIDs) are contracted to do. There are 70 BIDs, according to a city directory, which are responsible for everything from street cleaning of a certain corridor to the New Year’s Eve ball drop in Times Square.

During the holidays, the majority of these BIDs turn to Brooklyn-based, family-run Illumination by Arnold for help. The company has been lighting the streets of New York since before the existence of BIDs.

“We’ve been doing this for 111 years,” said Ed Migliaccio, who works at Illumination. “We manufacture, install, maintain, and remove.”

In the last five years, BIDs have really amped up the festivities in their neighborhoods, said Michael Lambert, co-chair of the NYC BID Association. There have been bigger or more eye-catching things like holiday pop-up shops, concerts, installations, and trolley tours.

“It just feels special … it makes people feel better, and it’s a break from the realities of life and the atmosphere creates a lot of fun,” Lambert said. And it gets people into the shopping spirit, he added.

Leon Zaid has 50-pound bags of chestnuts imported from Italy, he starts bringing in extra staff to help roast them at his food cart in November, and they don’t stop until the beginning of March.

“If I get them today, I sell them today,” Zaid said. It was only noon, and he had a half-empty bag in hand. But honestly, he said with a grimace, he does not like chestnuts.

They take time to prepare, so the roasting, steaming, and bagging takes up all of at least one person’s time. And the chestnuts themselves turn absolutely no profit.

“But people love them, for some reason,” Zaid said. So he has been selling chestnuts since he started running a food cart in 1999. He is now on Fifth Avenue just blocks away from the Saks holiday windows. Besides, people buy water and other snacks when they stop for chestnuts, so it tends to be great for business.

But this year hasn’t been so good. Usually there is a line that runs from the street corner cart down to the middle of the block. The street is so packed with visitors that “if you throw a handful of salt up [in the air], it doesn’t even hit the ground,” he said. Now, some days he has to pay out of pocket to cover costs. Traffic is casual, and while one waiting customer seems to always replace another, there is no line.

He gestured to the meager decorations down the block on a sunny weekend. Fendi’s dressed its building with wreaths and white lights, but the other ones on the block stand bare.

“It just doesn’t feel like Christmas this year,” Zaid said.

For Lydia Frantz from Astoria, roasted chestnuts are the farthest thing from what she has in mind when she thinks about the holidays.

Frantz moved to the city five years ago from Florida, where people celebrate Christmas and Hanukkah on the beach with a martini.

“I didn’t know what a roasted chestnut was until I moved here,” Frantz said. “I like the season … but the actual cold is not that great.”

Now Frantz spends her weekends at the LIC holiday market—as a vendor. The cold makes it too much of a struggle to want to be festive outdoors, bundled up in the snow with hot cocoa, Frantz said, and she prefers to be warm inside the confines of her home.

But just last week, Frantz’s mother came for a visit, so she did go see the Rockefeller Center’s iconic Christmas tree.

“She hasn’t seen it since 1975 or something, so she said, ‘Let’s go see it! I want to go take pictures with the angels,'” Frantz said.

The city is expecting 5 million tourists this holiday season, and estimates $3.5 billion in spending throughout the five boroughs.

Many come from across the country, or even from around the world, for the annual favorites like New York City Ballet’s “The Nutcracker” or to visit Bryant Park. But the odd and in-between sprinklings of festive instances—like choirs handing out branded hand sanitizer bottles in holiday colors and cannoli tours—add to the critical mass of holiday offerings that transform the city as winter sets in and there is an endless list of events for New Yorkers and visitors alike to discover.

Goosmann said that walking around her city, especially during the holidays, everything is either nostalgia or new and exciting. “I just want to do everything,” she said.