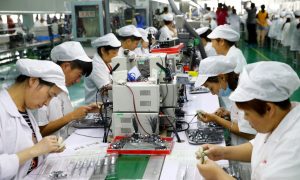 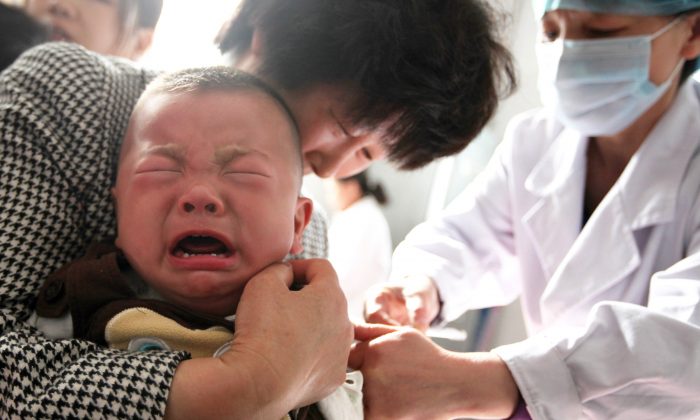 A child receives a vaccination shot at a hospital in Huaibei in China's eastern Anhui province on July 26, 2018. (-/AFP/Getty Images)
China Society

Negative population growth is projected to commence in China in the year 2027, according to a new paper released by the state-run Chinese Academy of Social Sciences in early January.

This follows recent comments by some experts pointing out that the birth rate in China has fallen sharply, while Chinese authorities are likely reporting fake data on local birth rates.

A Jan. 16 Radio Free Asia (RFA) report revealed that, since early 2016, when China abolished its one-child policy to allow couples to have two children, Shandong Province became the region with the highest number of “second children” born—contributing to roughly a quarter of the country’s total second children newborns.

But the latest data from China’s National Bureau of Statistics revealed that that is no longer the case. The number of births have dropped significantly in several cities in Shandong, including Qingdao, Liaocheng, Yantai, and Dezhou. In Qingdao, for example, between January and November 2018, births fell by 21.1 percent, and the births of second children fell by 29 percent, compared with the same period in 2017.

In the RFA report, Liu Kaiming, director of the Institute of Contemporary Observation research institute in Shenzhen City, southern China, said that based on various data, birth rates across China have indeed fallen drastically.

“In the past, the annual births were more than 20 million. Now it is only about 15 million,” Liu said. “Even though China now allows the second child, the birth rate is still declining. Shandong is a typical example. Live births in Zibo [a city in Shandong] dropped 26 percent last year.”

After decades of harshly enforcing the one-child policy, the country’s gender ratios have been significantly skewed, with roughly 115.4 boys to 100 girls, according to the World Bank.

Faced with the reality of an aging population and shrinking workforce, Chinese authorities have in recent years tried to switch gears completely and instead encourage more families to have children.

According to Huang Wenzheng, a senior researcher at the Chinese think tank, Center for China and Globalization, China’s birth rate is roughly 1.2 (children born per woman), so—contrary to government estimates—the turning point into negative population growth will definitely come before 2027.

Yi Fuxian, a senior scientist at the University of Wisconsin School of Medicine and Public Health, along with an economist from the National Economic Research Center of Peking University in China, Su Jian, shared similar views. In a recent article they wrote jointly, Yi and Su predicted that China has already entered negative population growth either in 2018 or will do so in 2019.

Yi told RFA that the paper published by Chinese Academy of Social Sciences is based on the assumption that China’s birth rate would continue to be 1.6—its current rate—or more in the following years. However, Yi believes this rate will not be sustained.

Yi also added that the Chinese authorities have consistently fudged data in order to make China appear to have a stable birth rate. The 2000 census showed that China’s birth rate was 1.22, but the National Bureau of Statistics later changed it to 1.8, according to Yi.

Had the Bureau not repeatedly reported false data, Yi believes the Chinese regime would have awoken to the dangers of the one-child policy earlier.

“It’s time to hold them accountable,” he said.