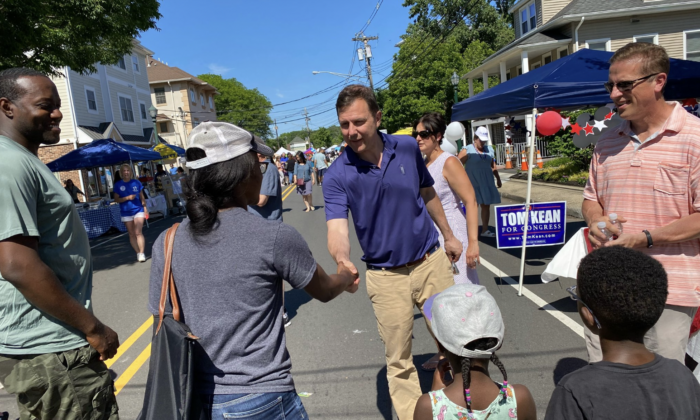 FORKED RIVER, N.J.—Democrats currently hold 10 of New Jersey’s 12 seats in the U.S. House of Representatives, but Republicans believe they have a good shot at sending at least two of those incumbents home this fall.

The only open seat in the state’s 12-member congressional delegation is in CD 8, where U.S. Rep. Albio Sires (D-N.J.) is retiring after representing the urban district across the Hudson from Manhattan since 2006. Port Authority Commissioner Robert Menendez Jr., the son of U.S. Sen. Bob Menendez (D-N.J.), is projected to dispatch Republican challenger Marcus Arroyo in the deep-blue district.

The most compelling New Jersey congressional races are projected to be in CD 7 and CD 3, where incumbent Democrats face robustly financed Republicans boosted by post-census redistricting and growing numbers of Republican voters.

The New Jersey congressional race drawing the most national attention, and one where the GOP challenger is actually favored to defeat an incumbent Democrat, is in the 7th District.

CD 7 is represented by Rep. Tom Malinowski (D-N.J.), who was first elected in 2018, defeating incumbent Rep. Leonard Lance (R-N.J.) and then winning reelection in 2020 by edging Republican Thomas Kean Jr. by 5,329 votes, or less than 1 percent.

A former state Senate minority leader, Kean’s name recognition and the shifting dynamics within the district actually make the challenger, by some projections, the favorite to unseat Malinowski, who is among the most vulnerable of the 2022 congressional incumbents.

CD 7 is the nation’s median congressional district, according to Cook Political Report, with 217 of the 435 House districts rated as more Democratic and 217 rated more Republican. But after a bipartisan redistricting commission redrew the state’s legislative maps following the 2020 census, it’s now colored slightly red.

The district is rated by the Cook Political Report and Larry J. Sabato’s Crystal Ball as “leaning Republican.” Inside Elections with Nathan L. Gonzales rates the Kean–Malinowski race as a “toss-up,” while the FiveThirtyEight forecast has Kean “slightly favored” to win.

The New York Times defines the district as “largely affluent and suburban,” populated by “the type of well-educated swing voters who helped Democrats across the country flip control of the House in 2018 and who are seen as crucial to November’s midterm elections.”

By mid-May, when the most recent Federal Election Commission (FEC) filings became available, nearly $7.5 million had already been raised by the two candidates in what will be one of the most closely watched congressional races of the 2022 midterm cycle. Both expected to garner ample funding from their parties’ national congressional campaign committees and other out-of-state sources.

Malinowski, a former U.S. State Department official and Human Rights Watch analyst who was born in Poland while it was under Soviet rule, reported to the FEC on May 18 that his campaign had raised more than $5.117 million, spent $1.525 million, and had $3.643 million in its war chest.

On July 6, his campaign issued a statement that it had raised more than $1.28 million in the April–June second quarter of 2022, bringing the campaign’s cash-on-hand to more than $4.2 million.

“This massive effort was achieved without accepting a penny from corporate PACs—unlike Republican candidate Tom Kean Jr., who continues to accept money from corporations, including ones he personally owns stock in. To date, Malinowski has out-raised Kean Jr. every quarter since spring of 2019,” his campaign said.

Kean’s May 18 FEC filing showed that his campaign had raised nearly $2.244 million, spent $1.131 million, and had nearly $1.207 million in cash on hand. The Open Secrets breakdown of his campaign finances indicates that 71.77 percent of his donations—nearly $1.6 million—comes from “large individual contributions.”

The early summer cadence of both campaigns is expected to intensify in the coming weeks. Thus far, Kean in Twitter posts and campaign statements has almost exclusively focused on “Bidenflation,” noting on July 8 that the price of eggs “have skyrocketed 184 percent” in the past year.

“It’s costing more to wash your clothes thanks to #Bidenflation,” Kean said in a July 5 Twitter post, noting the price of laundry detergent has risen 8 percent in the same period.

Malinowski has countered, in the early stages of the campaign, by rousing Democrats and moderates to action in the wake of the U.S. Supreme Court’s ruling in Dobbs v. Jackson Women’s Health Organization, hosting “an emergency Women’s Health Town Hall, to assess what “the ruling means for New Jersey, the path forward in Congress, and share concerns about the future.”

“The SCOTUS decision was a defeat, but we are not defeated,” Malinowski said in a campaign statement. “Our very realistic goal is to now turn this setback into the energy we need to win this November. Let’s set our sights really high rather than holding our heads down. Let’s do the work we know how to do.”

Malinowski has characterized Kean as a Trump lackey who is too conservative for New Jersey, claiming he isn’t the moderate Republican his father was when he served as the state’s governor, citing his refusal to condemn the Republican National Committee’s description of the Jan. 6, 2021, insurrection as “legitimate political discourse.”

Malinowski is also actively soliciting Republicans who don’t like Trump and aren’t in line with the GOP’s stance on conservative values.

In fact, Malinowski has been endorsed by New Jersey’s newly established Moderate Party, which is vying to create a viable third party “fusion” vote alternative, which would allow voters to cast ballots for him without doing so under the Democratic Party banner.

New Jersey, however, is among the 43 states that don’t permit a candidate to run under more than one party banner, outlawing “fusion” voting nearly a century ago.

Nevertheless, the Moderate Party, “formed by a group of New Jersey Republicans, Independents, and Democrats turned off by both major parties’ drift to ideological extremes,” has filed a petition with Secretary of State Tahesha Way to allow it to place Malinowski on the ballot as its candidate in addition to his berth as the Democrats’ entry.

As expected, Way rejected the petition under state law on June 8. Moderate Party founders, which include East Amwell Township Committeeman Richard Wolfe, a lifelong Republican, have vowed to challenge the state law as unconstitutional in a lawsuit.

But as of July 10, that lawsuit hasn’t materialized and time is running out for any type of legal action to render a decision before deadlines preclude implementation. New Jersey county clerks must begin sending out vote-by-mail ballots on Sept. 24.

The inaction has fostered ridicule from Republicans and the Kean campaign, calling the Moderate Party effort a stunt designed to distract voters.

Malinowski “is doing everything he can to run away from the Democrat Party and all the Biden votes he rubber-stamped,” GOP strategist Harrison Neely told The New Jersey Globe. “Once again, not even the law can get between Trader Tom and his political ambitions.”

Samantha Bullock, National Republican Congressional Committee regional press secretary, stated in a July 8 Twitter post that Malinowski “is rightfully ashamed of the damage he and his fellow Democrats have inflicted on the country, but hiding behind a fake third party doesn’t change reality. Malinowski is still a (corrupt) Democrat, and he’s going to appear on the ballot as one no matter what.”

But in a July 6 New York Times guest essay, Malinowski said the lawsuit is coming and that a Moderate Party where centrists can find a comfort zone is not just emerging in New Jersey, but across the country.

“The voters I meet every day in my district have views that defy tribal party stereotypes, no matter which party they have registered with,” he writes, noting that CD 7 was actually redistricted as “an ideal place to test out” the viability of a centrist party.

“The Moderate Party is an experiment: an alliance between Democrats of all stripes, independents, and moderate Republicans hoping to win an election while pursuing a reform to the election laws that could empower swing voters to save our democracy from toxic polarization,” Malinowski writes.

In CD 3, Republican Bob Healey, executive co-chair of the Viking Group, a shipbuilding company that employs at least 1,000 people in the Burlington area, topped two other candidates in the GOP primary and will square off with Rep. Andy Kim (D-N.J.) who is seeking a third term.

While the Cook Political Report classifies CD 3 as “leaning Democratic,” it rates the swing district race between Healey and Kim as competitive, with the GOP viewing the seat as potentially ripe for the taking.

Democrats and Kim are taking Healey’s challenge seriously, with the incumbent raising $4.341 million, spending nearly $1 million, and reporting $3.95 million in cash on hand as of May 18—the last time his campaign filed with the FEC.

Healey at that juncture—nearly a month before the primary—had raised $1.15 million, spent $712,000, and had $437,421 in cash on hand, according to his campaign’s filing. Like Kim, he is expected to receive a significant boost in funding from national party sources.