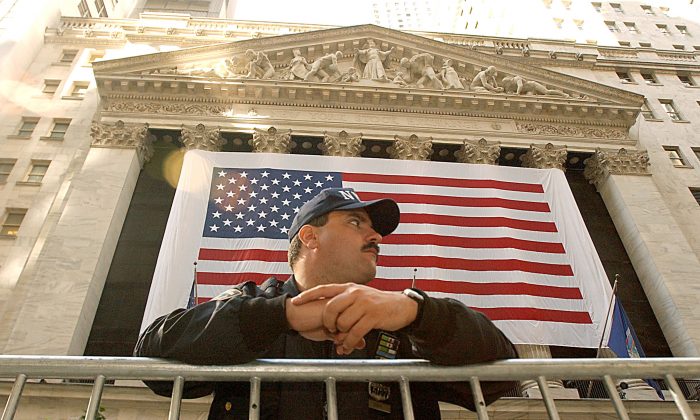 A New York Police Officer stands guard in front of the New York Stock Exchange on October 11, 2001 in New York, NY on the one month anniversary of the al-Qaeda attacks on the World Trade Center in New York and the Pentagon in Washington D.C. (Photo By Justin Sullivan/Getty Images)v
International

A newly-updated report from the terrorist organization al-Qaeda calls for operatives to instigate terrorist attacks by feeding hatred and racial tensions among groups in the United States—including among blacks, white supremacists, immigrants, and others.

“America is a big country and fortunately it is full of fools,” the report states. It goes on to list groups including “oppressed blacks,” terrorists, immigrants, foreigners, communists, white supremacists, and others. It says a terrorist can manipulate these groups by inciting “feelings of hatred in them and in their opponents … they will do the rest.”

The tactics are described under a section of the document, which calls for for instigating the “racists and the oppressed.”

The original document is in Arabic, but a translated version with some analysis was provided to Epoch Times by BLACKOPS Cyber Analysts, a private intelligence company. The document is an updated version of an al-Qaeda terrorist guide.

The analysis provided by BLACKOPS says the document is currently being spread by “previously unidentified al-Qaeda affiliated social media accounts,” and that it details tactics and strategies for terrorists to “take advantage of crisis scenarios and natural disasters as targets of opportunity for increased effectiveness of attacks.”

One section, relevant to the recent terrorist bombing in New York and attempted bombing in New Jersey, tells terrorists “No Explosives, No Problem,” and teaches them how to make bombs from common items found in stores.

Aside from the document’s focus on conventional terrorist attacks, it has several sections dedicated to highly unconventional tactics focused around spreading disinformation and creating disruptions.

One section calls for terrorists to intentionally “cause traffic jams.” It cites estimates that traffic congestion costs the United States $160 billion a year, and states “We’re looking for causing losses.”

Another section calls on terrorists to “tarnish the reputation of large companies,” by creating front advocacy or scientific organizations that can publish fake reports to “prove that the products of these companies are harmful to health or the environment.”

Other sections are more bizarre, such as a call for “causing horror,” with an example of “placing a huge snake” in a person’s food or water. Another section calls for “harmful plantings,” by doing things such as growing “a species of harmful trees;” or by intentionally planting trees over sewage lines so their roots break the pipes, or near buildings so the roots crack the foundations.

According to Drew Berquist, a counterterrorism expert for the intelligence community and founder of OpsLens, a website that provides commentary on national security issues, al-Qaeda has been struggling to stay legitimate following the rise of ISIS.

“They’re still productive, they’re just not getting the headlines, which is certainly why they would produce something like they did just did,” Berquist said, referring to the new document.

“I think they are struggling to figure out what their role is right now,” he said.