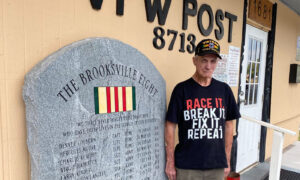 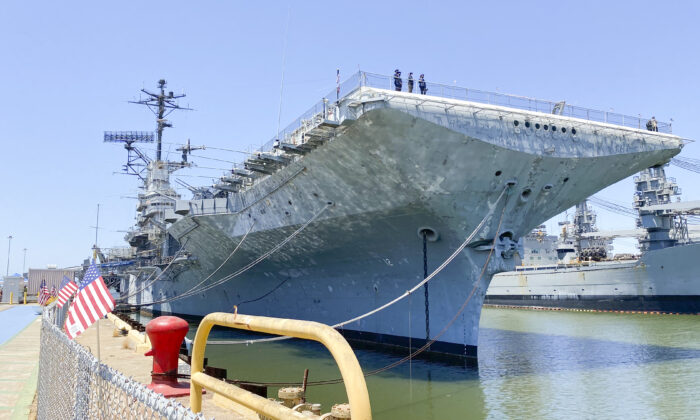 The USS Hornet is open for a Memorial Day tribute in Alameda, Calif., on May 31, 2021. (Ilene Eng/The Epoch Times)
Northern California

ALAMEDA, Calif.—Two best friends and Navy veterans shared with NTD Television some of their most memorable Vietnam War experiences.

Bill Fee, 73, joined the Navy in 1968 and served for four years at sea. As a then-20-year-old, he didn’t fully understand what patriotism means, he said. He grew to understand it after experiencing war.

“The most memorable, hardworking time was when the USS Pueblo got captured in North Korea,” he said. “We were in Vietnam, and we were sent to North Korea. It was snowing. All the guys on the flight deck were freezing, and our job was to show might and strong authority.”

When asked if he was ever afraid to be in combat, he replied: “18 to 22 years of age—we were all invincible. Nobody was really scared.”

“Here on the ship, we learned and we improved the strength of the military; today, all branches, overseas, any other countries, we are the strongest nation in the world,” he said.

He feels fortunate to have returned alive.

Fee has worked at the USS Hornet for 21 years. The ship is now a sea, air, and space museum, and he is an emcee and program manager for all the events on the ship.

He had a poor childhood and had only been through the sixth grade.

“My first really good father figure was a black first-class petty officer who said, ‘Do this, do this; oh, by the way, you’re going to finish high school.’ So they sent me to high school on this ship, and I was taught there. I passed all the tests, and I finished high school,” Ross said.

He served in the Cuban Missile Crisis on the USS Independence, Coral Sea, Ranger, Bonhomme Richard, Constellation, and Enterprise.

Ross retired on the USS Enterprise on the pier where the USS Hornet now resides.

Traveling around the world allowed him to have an appreciation for other people, including fellow Navy pilots.

“Having landed on an aircraft carrier, not being a pilot, just as a passenger, was an experience that is unbelievable to a person—or launching, getting catapulted off a carrier, that’s an experience. And these guys did it every day, sometimes four and five times a day. And they face the enemy every day.”

Ross recommends young people join the Navy, because he learned so much in his 30 years of experience.

“I worked on military aircraft; I worked on weapons systems; I did a lot of bombs, lot of guns, all that stuff, all aircraft related. I got to go on six aircraft carriers; I got to go around the world twice, cross the equator six times, and through the Suez Canal, when Gaddafi did me a favor and prevented me from meeting my wife in Australia, which was not a happy time,” he said, chuckling.

Today, they stay with the USS Hornet to teach the younger generation about history and learning from mistakes.

“I like it here because we get to educate the people about World War II, this ship’s history with Apollo, all that going down,” Ross said. “I get the chance to give back what the military gave to me, and the military gave me everything I am today.”

The USS Hornet was commissioned in November 1943. It was awarded 11 battle stars for its service in World War II. It also served in the Vietnam War and recovered the Apollo space flight landings.