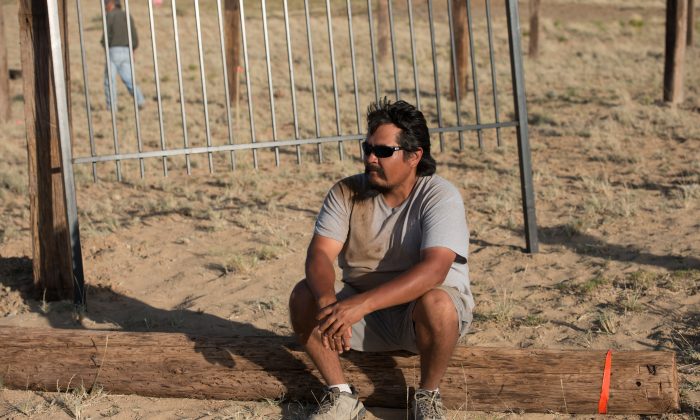 Navajo Veteran Wants to Heal Others With Wild Horses

When U.S. marine Larrison Manygoats returned from his tours of duty in Iraq, he was diagnosed with posttraumatic stress disorder (PTSD) and traumatic brain injuries (TBI). Recovery was a struggle, until a friend recommended a project with the Mustang Heritage Foundation, an organization that uses wild horses to help veterans overcome war trauma.

According to Manygoats, horse therapy can address severe trauma in ways that pills and talk therapy can’t touch.

“Working with the horse pulls these things out of you, emotionally, physically, to make you see that there is an exit, there is something out there that makes you want to do better, to strive, to be open minded. It gives hope,” he said.

Inspired by his own healing experience, Manygoats wants to help other veterans living in his community on the Navajo reservation near the town of Tuba, in northern Arizona.

With the help of his father and a handful of volunteers, Manygoats recently finished building a basic facility on some unused land on the reservation, which he calls a reconditioning center.

The center currently consists of only two circular pens (one inside the other) and a small corral, but it’s enough to start. All that’s needed now is a wounded veteran and a wild horse, and the reservation has plenty of both.

PTSD is characterized by flashbacks, nightmares, and severe anxiety due to witnessing or experiencing a devastating episode. Symptoms may include uncontrollable outbursts of anger, unshakable guilt and shame, and poor sleep and concentration due to a mind that obsessively replays traumatic events.

Since World War II, Native Americans have the highest U.S. military enlistment per capita of any race, but they often have fewer therapeutic resources when they return. Some seek pain medication in border towns, others turn to alcohol, many isolate themselves from the civilian world.

Horse therapy helps the devastated reconnect with life in a non-threatening way. Manygoats compares working with a wild horse to looking into a mirror—giving trauma patients a reflection of themselves they can work with.

“You have to deal with a thousand-pound animal that will fight you, it will test you, it will do everything possible until you learn how to reach out to that scared animal,” he said. “At the same time you’re working with the courage to move forward, to be more compassionate and open minded about problems. It’s challenging and exciting for the person who is working with a horse.”

Manygoats works with a horse training method called gentling—a technique made famous by the 1998 film, the Horse Whisperer. As opposed to conventional horse training which employs brute force to break a horse’s spirit, gentling involves careful observation of the horse and control of one’s own body language. The technique is remarkably effective at calming a frightened animal, but the trainer must stay focused.

“You can’t hide your feelings from a wild horse. If you’re carrying stress, anger, anxiety, or depression the horse can feel it, and its natural reaction is to flee,” Manygoats said.

The U.S. military has begun to see the value of horse therapy. “Recon: Unbridled” is a 2012 Pentagon Channel documentary about horse healing success stories, and several horse therapists and local VA chapters have since teamed up to start Horses for Heroes, a free program to help veterans and active military with PTSD, physical injuries, or trauma.

Wild horses are typically considered a nuisance on the Navajo reservation in northeastern Arizona, which has by far the largest concentration of wild mustangs anywhere in the United States—estimates are as high as 75,000.

Until 2013 the Navajo Nation was resigned to a systematic slaughter of the region’s excess horse population. Public outcry and months of negotiations have stopped the plan, but the animals remain a significant problem. Wild horses drain resources leading to droughts and overgrazing, and cost the U.S. Bureau of Land Management $72 million in 2013 alone.

Manygoats’ plan would relieve some of the area’s horse congestion by recruiting wild animals into service.

After wild horses are tamed, they can also serve in other types of healing in a practice known as hippotherapy (from the Greek word “hippos” meaning horse). People with physical disabilities, autism, and stroke climb on horseback and form a bond with the animal. Through this therapy, the horse becomes a powerful extension of a damaged body, helping restore muscle strength and neurological function.

Manygoats wants to offer the service free to veterans and elders in his community. He and his father are paying for the project out of their own pockets. Some of the structure was built with reclaimed materials (he recently returned from a long trip to collect railroad ties), but there is still a laundry list of materials left to collect: wood, saddles, blankets, bits, lead lines, hay, deworming paste and other horse medications.

“To have someone get inside the round pen for one month costs nearly $10,000, but that’s just the beginning phase of it. If this thing actually takes off and it starts to run smoothly, it will probably be about $4,000.”

Manygoats trusts that once the reservation sees what horses can do, the community will come forward to give him the support he needs. “We want people to come out and say, ‘Hey, you guys are doing a great thing.’ All we’re running on is encouragement and volunteer efforts,” he said.