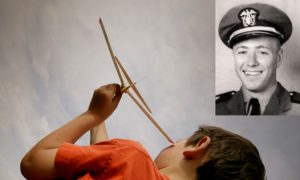 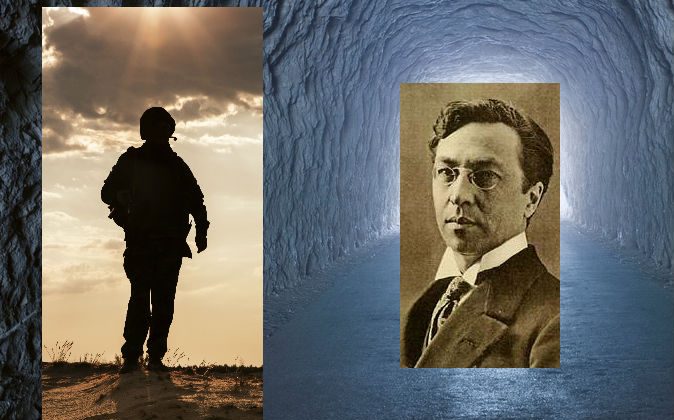 Right: Russian painter Vassily Kandinsky (1866–1944). (Wikimedia Commons) Image of a soldier's silhouette via Thinkstock and image of a tunnel via Shutterstock*
Beyond Science

David Paladin’s true story is one so full of hardship, perseverance, and metaphysical mystery, that it has captured the imagination of many over the past 70 years.

“Have you ever heard a story so powerful that it reverberated loudly through your interior landscape? Or it stopped you cold in your tracks and made you think—hard—about your life? I did in 1994, and it’s still with me today,” wrote Adele Ryan McDowell, Ph.D., in a Selfgrowth.com post, referring to Paladin’s story told to her by author Caroline Myss. “For weeks and weeks after attending a professional conference where I first heard this story, I told everyone I encountered this tale. And I mean everyone.”

In 1985, Paladin told Myss about his days as a childhood alcoholic on a Navajo reservation, his time serving in WWII, a strange coincidence that saved his life, and the torture he endured as a prisoner of war. The most mysterious part of Paladin’s story is the part in which the deceased Russian painter Vassily Kandinsky (1866–1944) may have entered his body and stayed there. That’s where reincarnation researcher Dr. H.N. Banerjee comes in. Banerjee wrote about Paladin’s case in his book “The Once and Future Life.”

The following account of Paladin’s life draws from Myss’s book, “Anatomy of the Spirit,” the story as she told it to Dr. McDowell, and Banerjee’s reports.

An alcoholic by the time he was 11, Paladin left the reservation in his mid-teens and got a job on a merchant ship. He befriended a young German man on the ship with whom he spent much time. He began sketching as a hobby during this time.

He was later drafted as a soldier in WWII, and he was sent as a spy behind Nazi lines. Native American languages were used to communicate reconnaissance information so the transmissions would remain unintelligible if intercepted. Paladin was captured by the Nazis.

His cruel punishment and torture in captivity included having his feet nailed to the floor. He was set to board a train to an extermination camp as a member of a “lesser race,” according to Nazi ideologies. A Nazi soldier prodded him along from behind with a rifle. When Paladin turned around, he found himself face to face with his German friend from his sailing days.

The soldier had him transferred to a prisoner of war camp instead of the extermination camp. Paladin survived, but conditions were far from comfortable at the prisoner-of-war camp, and he when the Allies opened up the camp he was found dangerously emaciated, unconscious and dying.

When he revived briefly, he was speaking Russian. They took him to the Russians, but when he was later able to give his name, rank, and serial number in English, he was transferred back to the U.S. military.

He was in a coma for two years in a Michigan hospital following the war. When he awoke, he told a nurse, “I am an artist.”

He returned to his reservation, where the elders took drastic measures to help him solve a spiritual problem they could see beneath his physical ailments. The took the braces off his legs and cast him into a river.

Paladin described for Myss what he experienced in that moment: “It was more difficult than enduring having my feet nailed to the floor. I saw the faces of those Nazi soldiers. I lived through all those months in the prison camp. I knew that I had to release my anger and hatred. I could barely keep myself from drowning, but I prayed to let the anger out of my body. That’s all I prayed, and my prayers were answered.”

He recovered. He developed his art skills further—with a painting style strikingly similar to Kandinsky’s.

Unlike when the soul of a deceased person reincarnates as a new life, a baby, Paladin’s could be a case of a soul entering a body at a time of weakness, when the main spirit may be absent. When hypnotized, Paladin would speak with a Russian accent and he seemed familiar with details of Kandinsky’s life. Though he painted in Kandinsky’s style, he also progressed as an artist to develop his own style. Banerjee felt that Paladin had regained his own spirit, but that Kandinsky’s spirit had entered and influenced Paladin.

Banerjee noted that Paladin seemed in full control of himself while painting, not possessed by Kandinsky’s spirit, though Paladin was in a sort of loose state as though channeling inspiration.

Paladin, who died in 1986, wrote in his book “Painting the Dream” about the state in which he painted: “My mind is relaxed, with a soft focus, in a daydream mode of consciousness. I am aware of changing, shifting images in my mind.

“I don’t know why the calligraphic forms appear. Kandinsky’s geometric forms give a sense of order, of resonating in certain areas; they are like a language. The calligraphic thought forms are also a language.

“I think that Kandinsky and I are painting the structure of the universe, tuning into the collective consciousness, each of us telling the stories and seeing the reality in a unique way.”

*Image of a tunnel via Shutterstock