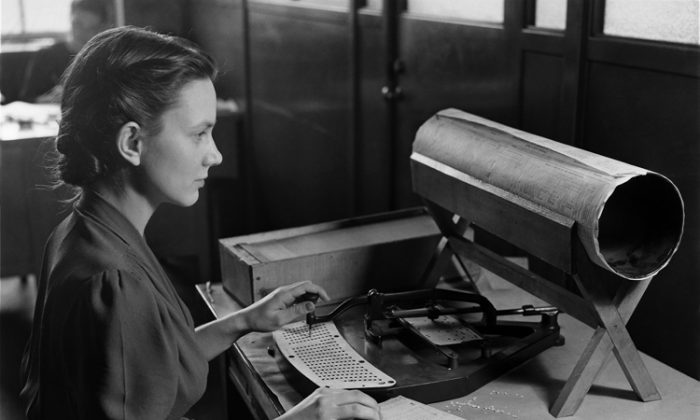 A woman operates a card puncher as part of an old tabulation system used by the U.S. Census Bureau to compile the thousands of facts. The National Archives will offer a digital release of data collected from the 1940 census on April 2. (U.S. National Archives/Public Domain)
US

The 1940 census will soon be released to the public, and archivists say it will be more user-friendly than previous records.

Since 1790, the U.S. government has periodically recorded the national population. But due to a 72-year statutory restriction on census records, information collected from 1940 won’t be available for public view until early next month.

For past census releases, the U.S. National Archives and Records Administration (NARA) has provided data on microfilm—a decades-old preservation method that saves on space, but invariably restricts user access. For the 1940 census, archivists worked for over three years so that entire record could be seen online.

“We have taken that microfilm and digitized it. So for the first time the census will be available digitally,” explained archivist Connie Potter in a video for the upcoming NARA release.

The digitization process involved scanning each microfilm roll as one image, and then going back through the scan to split the segments into individual images. Images include census schedules, maps, and descriptions of enumeration districts.

It took a team of archivists three months to review each of the 3.9 million images, but according to NARA, the work will allow more people to examine the record than ever before. Archivists say the digital format will let users search the 1940 census from the Internet using public computers in their research rooms, or even from their own computer at home for free.

NARA expects that many people will be interested in viewing the vast record—one which provides a data-filled look into a particularly rough period in U.S. history.

“This is the 1940 census, but it describes the country during the Depression,” said Potter. “It reflects the economic dislocation; how many people were immigrants; how many people had what level of education.”

On its website, NARA promotes the upcoming release with videos describing technical details of the project, as well as old newsreel footage stressing the duty of each citizen to participate in the “permanent inventory of our nation.”

“The United States of America, youngest by far of the world’s great nations, stands today the envy of the civilized world,” says the World War II-era newsreel announcer. “Its more than 130 million people, its 33 million homes, its 7 million farms, [and] its vast panorama of other resources.”

However, it was the inquiries into income that drew the most controversy. One New Hampshire senator even mounted a campaign against the question, but was unsuccessful. To quell concerns, the census did allow individuals to send in a confidential card listing their income—an option according to NARA that was used by only 2 percent of the population.

While accessing the 1940 census will be easier than earlier records, finding specific data on friends and relatives still requires a little digging. The Census Bureau didn’t establish a name index for the records, and NARA says they don’t have the staff or budget to create one now.

However, users will still be able to find people through the 1940 census if they know the enumeration district the individual lived in.

NARA offers an enumeration district database that users can search online, and street maps that show district boundaries. While eager users will be able to locate the areas they’re interested in now, further details of the 1940 census won’t be available until April 2.