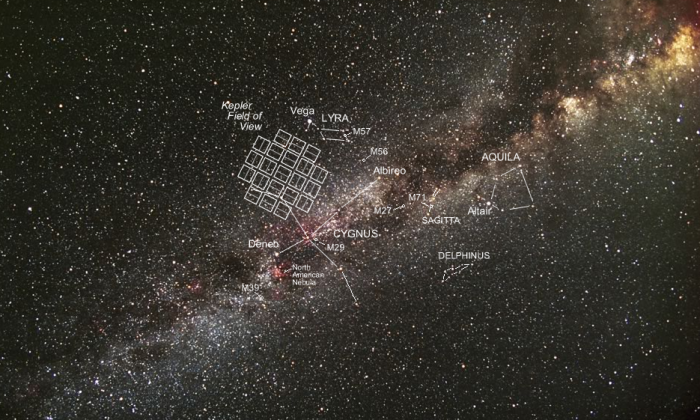 This is Kepler's field of view superimposed on the night sky. (Carter Roberts/NASA)
Science

NASA’s Kepler space telescope discovered 1,284 new planets, doubling its planet haul thus far. Nine of them are about the size of Earth, or slightly larger, and orbit their stars at a distance that allows liquid water, making them potentially habitable, the space agency announced May 10.

The discovery was possible thanks to a new method that can sift through Kepler data and validate hundreds of new planets in a matter of days, instead of years.

The method was conceived by Timothy Morton, associate research scholar at Princeton University in New Jersey.

Morton came up with a fully automated technique that determines how probable it is a signal from one of the stars Kepler observes indicates there’s a planet orbiting it.

Kepler has been looking at 150,000 stars for about four years. It detects the slight dimming of the stars when a planet passes in front of them.

Before Kepler, scientists were looking for planets through ground-based telescopes, but 60 to 70 percent of signals that potentially indicated planets were thrown out as false alarms, according to Natalie Batalha, Kepler mission scientist at NASA’s Ames Research Center in Moffett Field, Calif.

That’s because some neighboring stars may pass between the observed star and the telescope deceiving it into signalling a planet. Only further time-consuming observations were able to discern these “impostors.”

When Kepler mission started, scientists anticipated a lot of its “candidates” for planets would have to be dismissed too, Batalha said during a NASA teleconference to announce the Kepler findings on May 10.

He found that almost 1,300 of the more than 4,300 Kepler “candidates” were more than 99 percent likely to be planets.

Another over 1,300 “candidates” are more likely to be planets, but don’t reach the 99-percent threshold. Also, 984 previously validated planets were confirmed by the new method.

Only 9 of the newly validated planets are potentially habitable. That means they are less than 1.6 times the size of Earth and are the right distance from their stars to have liquid water on surface.

“These are the hardest planets to find,” Batalha said.

To actually be habitable, other factors come into play, like how much radiation the planet receives from its stars and what its atmosphere is like.

Still, calculating with 100 billion stars in our galaxy, Batalha estimates there could be tens of billions of potentially habitable planets in the Milky Way.

The Kepler mission is expected to last until the end of September 2017.

Where to Watch Mercury’s Transit Between the Sun and Earth: NASA