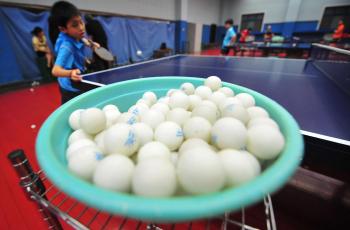 Conan Milner
writer
Conan Milner is a health reporter for the Epoch Times. He graduated from Wayne State University with a Bachelor of Fine Arts and is a member of the American Herbalist Guild.
View profile
Follow
biggersmaller
Print
NASA researchers may incorporate 150,000 pingpong balls into the design of their next astronaut module simulator. Students and engineers at the agency’s Langley research center in Hampton, Va. are looking to the inexpensive table tennis toy for its ability to float on water.

The proposed design for the unmanned simulator is helping pave the way for NASA’s next generation spacecraft—the Orion crew exploration vehicle. Carrying up to four astronauts to low Earth orbit and beyond, Orion is designed to replace the agency’s current space shuttle.

Orion’s first suborbital flight test will launch 75 miles above the Earth, but the crew module will not be pressurized during the test. Lacking the buoyancy of a pressurized craft, researchers needed to find a way to preserve the simulated crew module for analysis and retesting—and prevent it from sinking to the bottom of the Atlantic Ocean after splashdown.

Langley engineer John DiNonno proposed an inexpensive and lightweight solution: pingpong balls. DiNonno says he got the idea from a Discovery Channel program about raising a sunken boat using 27,000 of the hollow celluloid balls.

Students were responsible for testing pingpong balls of varying quality to determine how the balls would react to the near vacuum at the edge of space, as well as their ability to float. The balls were subjected to mechanical loads using a hydraulic press and heated to high temperatures to see how they would react to the descent into Earth’s atmosphere.

The balls also endured electrostatic discharge tests to determine if they would produce a static charge that might disrupt the space capsule’s electronics. Researchers said that in every evaluation the pingpong balls met the challenge.

“Through all our testing and calculations, we figured out that it could be a safe and viable option,” said Heather Blount, a materials science engineering student at Virginia Tech in a press release.

Engineers determined that it would take at least 150,000 pingpong balls to keep the crew module afloat. At a retail price of 50 cents per ball the solution is a fraction of the cost of traditional options, yet students hope that a bulk purchase of balls can reduce the cost even more.

Engineers explain that the pingpong balls will probably be stored in netted bags secured inside the crew module prior to launch. When the unsealed crew module splashes down, the buoyancy of the balls will offset the weight of incoming water, allowing the craft to float.

The pingpong ball design concept still needs to be approved by the flight test team and NASA senior management, but researchers say that even if the agency doesn’t use the idea, it may still have potential for other applications.