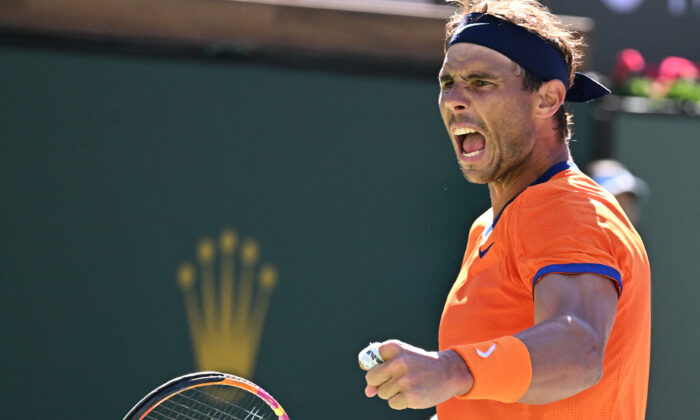 Rafael Nadal of Spain reacts after winning a shot as he defeated Sebastian Korda of the United States in a third set tiebreaker at the BNP Paribas open at the Indian Wells Tennis Garden in Indian Wells, Calif., on Mar 12, 2022. (Jayne Kamin-Oncea/USA TODAY Sports via Reuters)
Tennis

INDIAN WELLS, Calif.—Rafa Nadal roared back from 5–2 down in the third set to defeat American Sebastian Korda 6-2 1-6 7-6(3) in the second round at Indian Wells on Saturday and remain unbeaten in 2022.

After cruising through the first set in 35 minutes, the Spaniard struggled to cope with a more aggressive approach from the 21-year-old who stormed through the second.

Nadal’s normally solid serve let him down in the third and he committed his seventh double fault to fall two breaks down in front of a stunned crowd under blue skies in the Southern California desert before fighting back to force a tiebreak.

The veteran was then much more composed and sealed the win when Korda’s backhand landed wide.

“Everyone knows this is my favorite place to play and it is amazing to play in front of all you guys,” Nadal, who has won the tournament three times, told the supportive crowd on Stadium One.

“I feel very lucky today to be through. Sebastian was playing some fantastic tennis. He had his chances, but that’s tennis.”

The loss will sting for Korda, who grew up idolizing the 21-time Grand Slam champion and even named his cat after him.

With the win, Nadal is now undefeated in 16 matches this year.

Before his match, Nadal announced that he would not compete at the Miami Open, which starts later this month.

Earlier on Saturday, newly-crowned world number one Daniil Medvedev dispatched Tomas Machac 6–3 6–2 to cruise into the third round.

Medvedev’s powerful serve and almost impenetrable defense proved too much for the Czech qualifier to handle on a hot day in the Southern California desert.

The Russian received a warm welcome from the crowd on Stadium One when he was introduced as the world’s top men’s player after the match.

“This is the first time I have heard this and people clapped so thanks a lot for the nice welcome,” Medvedev said.

The 26-year-old U.S. Open champion is seeking his first win at the Masters 1000 tournament.