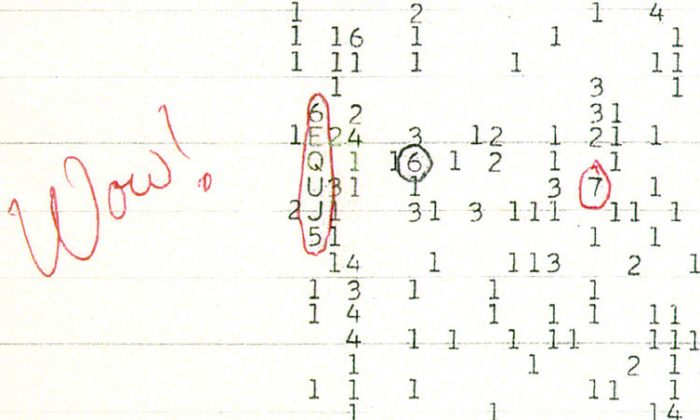 A printout of a radio signal from space detected on Aug. 15, 1977. It became known as the "Wow!" signal after astronomer Jerry Ehman wrote that exclamation next to it, expressing his shock at the unusual find. (Ohio State University Radio Observatory and the North American AstroPhysical Observatory)
Beyond Science

For almost 40 years, astronomers have wondered whether an anomalous 72-second radio signal from space may have been an attempt by extraterrestrials to contact us.

On Aug. 15, 1977, astronomer Jerry Ehman looked at a computer printout from the Big Ear radio telescope in Ohio. He saw the intense spike in radio waves and wrote the word “Wow!” on the printout, giving the signal the moniker it is known by today.

The signal was at roughly the same frequency as the waves emitted by a hydrogen atom changing states. Astronomers suspected a communication from intelligent extraterrestrials might have exactly this characteristic. One reason for this suspicion is that hydrogen is the most common element in the universe. Another reason is that this frequency could easily penetrate the Earth’s atmosphere, a New Scientist article notes.

“It was the most significant thing we had seen,” Ehman recalled in an interview with Cleveland’s The Plain Dealer.

Astronomers hoped to decipher some meaning in it, but were unsuccessful. And no similar signals have been received since, leaving it a mystery.

Astronomer Antonio Paris at St. Petersburg College in Florida, however, announced that he thinks the signal may have been created by comets. His paper was published online in the Journal of the Washington Academy of Sciences on Jan. 1.

He said the comets 266P/Christensen and P/2008 Y2 (Gibbs) were in the right place at the right time in 1977. “Surrounding every active comet … is a large hydrogen cloud with a radius of several million kilometers,” his report states. “The comet(s) and/or their hydrogen clouds are strong candidates for the source of the 1977 ‘Wow’ signal.”

The comets were not detected until 2006, and so were not previously considered in the search for sources of the “Wow!” signal.

Space Aliens Live Quietly Among Us, Say Some Scientists and Officials

He’s not sure the signal would have been strong enough. He told New Scientist: “If comets were radio-bright at 21 centimeters, I would be puzzled as to why they aren’t observed more often at those wavelengths.”

In 2017 and 2018 when the same comets again enter the same region of space, an analysis of their hydrogen signals could confirm Paris’ theory.