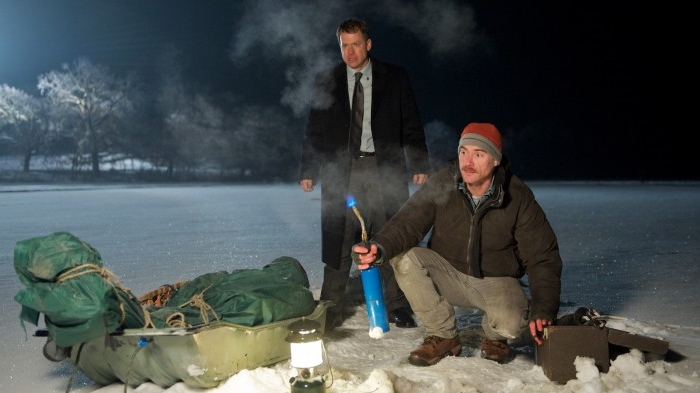 Greg Kinnear as an insurance agent black mailed by Billy Crudup, as the unstable locksmith (front), into stealing a rare violin from a retired farmer in the comedy-drama “Thin Ice.” (Wilson R. Webb / ATO Pictures)
Entertainment

Thin Ice is like Fargo meets The Sting, except that those other two movies are very interesting. Granted, the actual “long con” at the end of “Thin Ice” is brilliant, as most sting operations tend to be, but it’s too little too late.

Greg Kinnear plays a morally bankrupt, weasely insurance agent named Mickey Prohaska. Mickey’s mindset is about taking advantage of anything and everyone in small-time, nickel-and-diming kinds of ways. He’s motivated to do two things: get his wife (Lea Thompson) back and move somewhere far south of freezing Wisconsin.

He thinks that he’s found the ultimate sucker for an insurance commission in the form of a needy old farmer named Gorvy (Alan Arkin). Gorvy, it turns out, happens to be in ownership of an asset worth a whole lot more than a commission. He also happens to be more in possession of his wits than one would first ascertain.

As Mickey tries to sell Gorvy a bunch of insurance he doesn’t need (as he tells a protégé, “There’s no such thing as over-insured”), a sneaky, short-fused locksmith (Billy Crudup) shows up to install an alarm system. He’s like the tar baby in the Uncle Remus fairy tales; bad stuff sticks to him.

Mickey tries to run him off but then finds himself stuck—dragged down to a level of fraud and lies much deeper and deadlier than he was previously used to. It’s like a lower ring of hell.

The first half of the movie is a dreary little dark gray-blue world of insurance salesmen living in a cold climate. There’s absolutely no tension for a long time. Extremely boring is almost an adequate description.

Kinnear’s character is the soul-cousin of William H. Macy’s character Jerry Lundegaard in Fargo, without the accent but with the same petty deceitfulness that functions as an invitation to get caught in the net of a deeper level of evil. And both of their stories take place in the frozen Midwest winter.

Kinnear is very good at this kind of character, and characters with borderline senility that masks wiliness are Arkin’s stock-in-trade. Top-notch character actor Bob Balaban does a well-studied turn here as an expert violinmaker. Billy Crudup is a world-class actor all around.

But none of this talent really helps—one doesn’t come to care about any of these characters, or what happens to them.

Thin Ice would come under the heading of dark comedy, but the funny’s not that funny. It’s more true to the noir category in its cynicism, but the cynicism is not of the scintillating kind. It’s more a kind of small-minded meanness. What lessons can be learned? Small-minded meanness is an open invitation to get stung—big time.