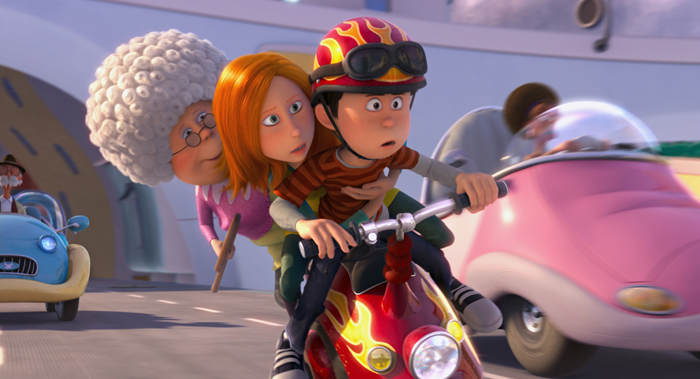 Grammy Norma voiced by Betty White (L), Audrey voiced by Taylor Swift (center), and Ted voiced by Zac Efron (R), are on the race of their lives in animation-family-fantasy “The Lorax.” (Universal Pictures and Illumination Entertainment)
Entertainment

Kids’ performers like Peewee Herman understand what makes kids laugh. This reviewer—not so much. Fortunately, there were lots of kids at the screening. You gotta watch ’em. They were giggling, singing along to the musical numbers, bouncing, boogieing in their seats, and happily and repeatedly kicking the reviewer’s seat. Bingo.

One can imagine frazzled parents reading the above paragraph and muttering, “Say no more,” dropping The Epoch Times on the breakfast table and calling for matinee tickets with alacrity—”Honey?! I found something!”

For the frazzled parents of the world, we give “Dr. Seuss’ The Lorax” 4 kid stars. That roughly translates to 2 adult stars. You might like it. You might also take a much-needed nap.

It’s an adventure story wherein our hero, young Ted (voiced by Zac Efron), leaves the confines of his all-plastic city and searches for the answer to what happened to all the real trees. He learns the importance of balancing the environment with economic growth.

One would at first think that the movie’s No. 2 antagonist is a young, free-spirited musician with decent rock-guitar chops, called “The Once-ler,” but don’t be fooled! He turns out to be the worst kind of nature-exploiting entrepreneur!

He takes leave of his shaming mother (“You’ll never amount to anything!”) in a covered wagon drawn by his donkey, Melvin, and decides to settle down in the pastoral Truffula Valley. Here he proceeds to chop down all the Truffula trees, using their leaves to make “Thneeds,” a one-size-fits-all, sweater-sock-scarf-hat-pajama thingamajig, which can address various and sundry clothing thneeds.

His factory proliferates, pollutes, and eventually drives out all the valley’s animal species. Among these are hairless, orange flying tur-duck-en affairs, some orange Humming-Fish, and some brown Bar-ba-loots, which are sort of small grizzlies. This being Seuss-land, they are all very cutesy and more than a little strange.

The Lorax, living in a different dimension, materializes in ours when the trees and the animals become endangered, coming and going in manners distinctly biblical. Upon arrival, he administers admonishments in a fairly strong New York accent.

As mentioned, protagonist Ted escapes from the hermetically sealed Thneedville, which is ruled over by the No. 1 antagonist, a tiny despot voiced by Rob Riggle. He discovers the now ancient and remorseful Once-ler holed up in the remnants of his factory in the dark, deserted land of Truffula tree stumps.

Will Ted learn how he can bring home a tree for the girl he pines for, Audrey (voiced by Taylor Swift)? Will he figure out how to restore nature’s balance?

If you like the new, rock-music Broadway dance numbers (as opposed to the old Tin Pan Alley Broadway), lots of rich colors, 3-D cartoon fun, and especially if you need an engaging activity for the little ones that carries a good message, this film’s for you. You can either clap—or nap.