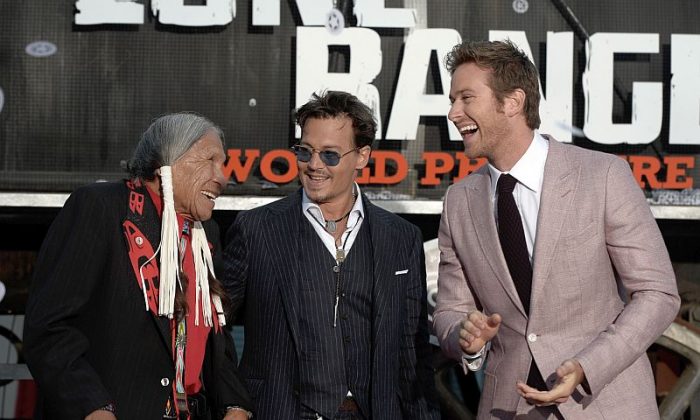 Johnny Depp looked promising in that war paint, didn’t he? C’mon, you can admit it. You saw the movie poster and thought, “Wow! Another cool, Jack Sparrow-type rock-star makeup job—check out the dead crow on his head! The ‘Lone Ranger’ will be awesome!” Right? Well, all one can say of “The Lone Ranger” is—what a waste of an excellent costume.

It should have been great, or at least very good. The team of Depp and director Gore Verbinski had a blast with at least the first “Pirates of the Caribbean,” so how could they not start a whole new, but similar, very fun comedic franchise, right? Wrong. The problem is producer Jerry Bruckheimer’s “more is more” philosophy of filmmaking.

It’s San Francisco, 1933. A kid wearing a Lone Ranger outfit at a carnival goes into the Wild West tent, which looks like New York’s Museum of Natural History. Tonto, the Ranger’s Comanche sidekick of “Kemosabe” fame, is in one of the display cases, billed as “The savage in his natural habitat.” He looks stuffed, like the grizzly bear in the neighboring display.

Except he’s alive! Since this “Lone Ranger” is the resurrection of an Americana legend, this is an origins tale, and so the ancient, slightly creepy Tonto tells the little kid how it really was back in Texas in 1869. This setup, similar to the one in the recent “Oz the Great and Powerful,” works. The entire rest of the movie does not.

First off, there’s way too much bloated, overstuffed plot. The transcontinental railroad is reaching westward, and there’s construction in the Monument Valley desert. Tom Wilkinson plays a devious railroad man behind the project.

Butch Cavendish (William Fichtner) is a nasty outlaw in captivity aboard a train out along those parts. Chained alongside him is one Tonto, wearing the dead-crow hat, which he “feeds” intermittently by crunching a fistful of peanuts in front of its beak.

Helena Bonham Carter is a whorehouse madam with an ivory tattooed leg, which has a gun in it and shoots out her high heel. There’s a “spirit horse” that drinks beer and belches. There are cross-dressing bandits, and two trains chasing each other in a Disneyland “Magic Mountain”-type setting. There are even killer alien vampire rabbits.

How does it all relate? It doesn’t matter. It’s all background for The Lone Ranger (Armie Hammer) to act like an inept momma’s boy, ever so slowly maturing into the superhero vigilante we all know and love, while getting verbally slapped around by Depp’s Jack-Sparrow-as-Comanche-Indian’s scathing one-liners. Actually, they are not that scathing. Hit or miss. Often even slightly wince-inducing, which is a little bit sad.

Now, there is amazing scenery. There are truly gorgeous, breathtaking shots of the red-rock desert American West. And you say to yourself, “How can a movie look so good and be so bad?”

The problem is, the movie doesn’t know what it wants to be. Clearly comedic—gotta cash in on Depp’s sly-confused, mystical-bumbling-savant shtick, naturally. But then all of a sudden, there’s solemn music and gruesome killings. Is it now a serious Western? No, because it has alien killer rabbits.

And there are way too many computer-generated scenes of over-the-top ridiculous cartoon mishaps and mayhem that haven’t an iota of tension or believability, so it can’t even be super-fun thrill-ride fluff like “White House Down.”

What mainly goes on in this movie is crunching. Peanut crunching. The boy in the Wild West tent slowly, excruciatingly, crunches his peanuts. Tonto crunches peanuts for his dead-bird hat. When the Ranger and Tonto are buried up to their necks and scorpions crawl on their faces, the spirit horse licks them off—and crunches them.

Crunch-crunch-crunch. And slurping and glugging. We already talked about the horse glugging beer and belching. This is all meant to be a running gag. It’s maddening. It’s like living with a spouse who slurps soup and chews loudly. One dreams of divorce.

Heck of a costume, though! The war paint! The dead crow! Too bad.