Movie Review: ‘Submission’: A Warning to Dallying Professors in the #MeToo Era

Mark Jackson
Film Critic
Mark Jackson is the senior film critic for The Epoch Times. Mark has 20 years' experience as a professional New York actor, classical theater training, and a BA in philosophy. He recently narrated the Epoch Times audiobook “How the Specter of Communism is Ruling Our World,” and has a Rotten Tomatoes author page.
View profile
biggersmaller
Print

In this time of #MeToo and #TimesUp, here comes another coed-and-professor “cohabitation” story, where the fool professor sleeps with his foxy student because she flatters his novel, and he ignores her ulterior motive, even as it jumps up and down and waves a red flag.

Creative-writing professor Ted Swenson (a bewigged Stanley Tucci) is a novelist at a classic, fall-foliaged Vermont liberal arts college, who’s so disgusted with the fact he has to teach (heaven forbid!) that he can’t manage to get any writing done. His second novel languishes.

On the one hand, you feel for him; his class is full of overly sensitive, politically correct, intellectually flaccid students who write drivel and then group analyze it in emo fashion.

Where’s the suspense? There is none. Warning signs parade themselves; a fellow teacher (Janeane Garofalo) tells him the kid’s got issues. Then there’s the mild Jekyll/Hyde personality switch (and the sex-for-agent-introduction bait-and-switch) that Angela pulls on him. But he’s not going to pay attention to any of that. Noooo.

This is the exact type of straying, can’t-write-his-second-book professor that was done more convincingly by William Hurt, with Meryl Streep as the long-suffering wife, in 1998’s “One True Thing.”

A Turn for the Worse

The young woman as muse to the aging artist is an archetype; the straying husband is a cliché, and now, add to all that, the ultra-carefulness of male professors needing to leave doors open when talking to female students, or even to tape-recording conversations. This is now the world we live in, but the latter cliché is only a recent addition. It wasn’t always this complicated. Awareness of this particular dynamic started with David Mamet’s 1992 play, “Oleanna, which at the time stirred up controversy for making the professor the victim. Now it’s already old hat.

So what’s new? What’s the ultimate takeaway from this story, other than “Married professors, don’t mess with your students,” and conversely, “Young vixens, don’t use your hapless professors as stepping stones to your careers and ruin their lives”? Because, as is, “Submission” would appear merely to provide a game plan for opportunistic young women to take advantage of worthless, wretched men, by whoring themselves out for the sake of their artistic careers.

Stanley Tucci and Addison Timlin as professor and student in “Submission.” (Great Point Media/Paladin)Maybe it’ll make itself useful as an instructional video for male professors, with mandatory viewing requirements by institutions of higher learning—a kind of “Scared Straight” for campus Ph.D.s.

Mark Jackson
Film Critic
Mark Jackson is the senior film critic for The Epoch Times. Mark has 20 years' experience as a professional New York actor, classical theater training, and a BA in philosophy. He recently narrated the Epoch Times audiobook “How the Specter of Communism is Ruling Our World,” and has a Rotten Tomatoes author page.
Website 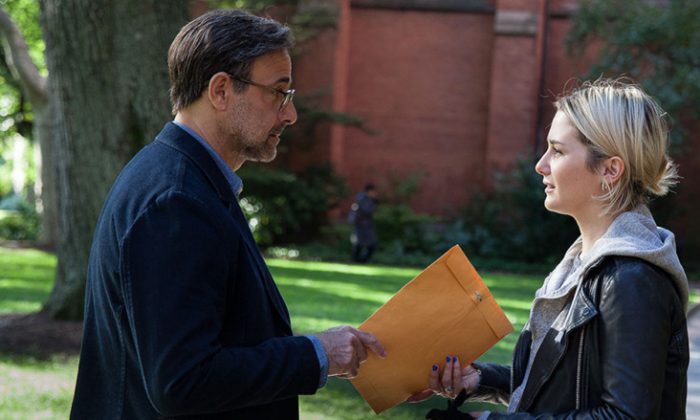