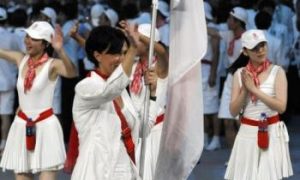 Girls Made to Strip Naked for Opening Ceremony Selection
0 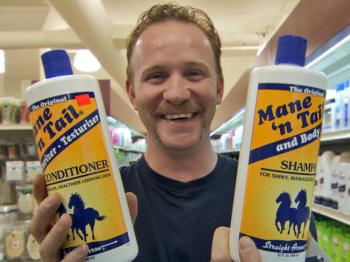 PITCH MAN: Morgan Spurlock poses with one of the branded products he approached for placement in 'POM Wonderful Presents: The Greatest Movie Ever Sold,' his documentary about product placement. (Daniel Marracino/Sony Pictures Classics )
Entertainment

With his latest documentary, The Greatest Movie Ever Sold, Spurlock easily puts himself on equal footing with the more famous Michael Moore. His gig, however, is not finger-pointing at specific evil bad guys and setting them up for public pratfalls (Moore’s stock-in-trade), but rather documenting humanity’s shared, creeping immersion in a big dye vat of… well… evil.

It almost seems like Spurlock was listening to Paul Simon’s song “You Can Call Me Al,” and has devoted his career thus far to answering two of the song’s questions.

The first is “A man walks down the street; he says why am I soft in the middle now…?” His answer to this question was his film Super Size Me.

The second question is “A man walks down the street; he says why am I short of attention, got a short little span of attention…?” Spurlock explores the answer in The Greatest Movie Ever Sold.

This is a movie about the ramifications of product placement, advertising, and marketing. It’s like one of those M. C. Escher closed-circuit staircase drawings. (Where does it start? Where does it end?)

Spurlock brands and then markets his film to sponsors to get them to fund his film so that they can then product-place their brands in the film, which in turn, is all about branding and product-placement in film. Dizzy yet?

In doing this, he exposes the inner workings of this aspect of content creation, poses questions of integrity, and brings in intellectual heavy-hitters like Noam Chomsky and Ralph Nader to talk about the effect of all of this on our collective consciousness.

We follow him around as does brand recon, takes meetings, and explores product placement with companies. He is highly canny where showbiz is concerned: fast on his feet, quite the master pitchman, and highly entertaining.

The scariest aspect of the movie is the part about the use of neuromarketing in movie trailers. He submits himself to an MRI, during which the researchers scan his brain while doing product placement. He is bombarded with images. When he comes out, without even realizing it, he says he wants a Coke. We are shown how his brain lit up around Coke in the trailer, showing the dopamine release. Pure addiction.

The most hopeful note of the film is when Spurlock interviews government people in the city of Sao Paulo, who decided to rid the city of all billboards and ads—a “Clean City” campaign. Ninety percent of the people liked it. They found it gave them back their ability to focus. Now merchants do word-of-mouth marketing and look for referrals, instead of advertising.

Spurlock is very funny. He has a highly infectious humor and a deep appreciation of the ridiculous. My favorite sight gag in the film is of him spoofing himself “selling out” (and yet he is actually selling out) for a shampoo called Mane & Tail.

This product is an actual 2-in-1 shampoo that’s designed for use on horses. And humans. Spurlock knows that we, the audience, can appreciate the ridiculousness of that. So there he is, in the frothy bubble bath, first shampooing his own hair, then his son’s hair, and then reaching over his son to shampoo a Shetland pony that is also standing in the bathtub.

So how do we rectify this situation? Nader says it’s gotten to the point where the only way to escape advertising is by going to sleep.

People should see this important film and educate themselves about the insidious source of why our collective shrinking attention span continues to dwindle rapidly. Me, personally—I’d like to see New York City follow Sao Paulo’s example. I’d like to get my own focus back.

It will be interesting to see if Spurlock, with all his savvy playing of the product placement game can (ironically) raise our awareness of the dangers of branding, advertising, marketing, and product-placement.